The Challenge of the Karakoram

This entry was posted on 22nd August 2016 by Tom Richardson. 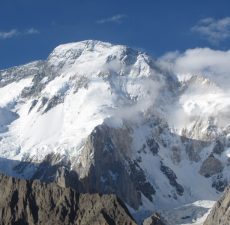 It isn’t always easy to anticipate exactly when an adventure will begin.

Leading the KE Adventure Travel trip to the Karakoram to trek up the Baltoro Glacier, visit K2 Base Camp and cross the Gondogoro La, I thought it would begin with the dramatic flight from Islamabad to Skardu, over the top of Nanga Parbat.

In the event I was quite a few days out in my estimation. As I was in the process of changing planes in Turkey at Istanbul airport, the attempted military coup took place. We were on board our flight with the engines running when the captain announced that the flight had been cancelled due to “security”. Members of the cabin crew, knowing more than us, burst into tears. Over the next 24 hours we experienced glass shattering explosions, stampedes by other passengers, parts of the ceiling falling in after military fly-bys and the whole airport being overrun by thousands of shouting and singing presidential supporters. The next morning the information board showed all flights cancelled and very few staff appeared for work. Eventually, everyone in the airport had to queue for many hours to get a new boarding card to fly out.

When my group finally all gathered in Islamabad I hoped that things would go more smoothly. Wrong again. The flight to Skardu was cancelled due to bad weather, so we had to set off up the infamous Karakoram Highway. I have driven up and down this route many times since my first visit with Joe Simpson, Andy Cave and others in 1987. Our epic was graphically described in Joe’s book “This Game of Ghosts”. Whenever I travel this road, I always hope it will be the last time. It has improved slightly, in that we had a police escort through the potential trouble spots of Chilas, but it still takes two days plus.  As is traditional, we were held up by a traffic jam caused by a landslide near the Gilgit Skardu turnoff.

As it got dark we also learned that there was a delay further ahead near Skardu. The road along this section is a truck’s width chopped out of the cliff side. Driving along the road in the dark, let alone getting past another landslide or stone fall would not have been a good option. The nearest town is Gilgit so we drove there to try to find some accommodation. Unfortunately, despite phoning about 20 hotels we could not find anything. That was until Mohammed Ali, (a Police Officer with special responsibility for Tourist Facilitation as it said on his card), intervened and sorted it for us shortly after midnight.

The next day the news about what I thought was the only road to Skardu was worse. It was now impassable and would remain so for some time. However, Zafer, the Director of Baltistan Tours and our agent in Pakistan knew an ingenious alternative. This took us by bus and jeep over the 4000m Desoia Plains around the back of Nanga Parbat and finally deposited us in Skardu at some time around midnight the next day.

Finally, I thought we had made it to the beginning of our adventure and we could get on with the original plan. It turned out that three further obstacles stood in our way. Firstly, so called security. The Pakistan Army are very anxious about security in the area as it is near to the disputed border with India. We didn’t get clearance despite sending all the required documents in weeks advance, until the evening of the following day. The excellent K2 Motel didn’t have any rooms available either so we had to camp in the rose garden. And despite leaving the next day at 3am to try to drive to the beginning of the trek and then walk a bit, we couldn’t recruit any porters at our destination in Askole as they were all having a festival.

In the end though the trek went well. The local crew, especially Mohammed Khan and Karim were excellent. The cook team and the food they turned out was superb and the views were stunning. We all crossed the pass, flew back from Skardu to Islamabad and even had a coup free transfer in Istanbul airport back home.

The pictures below tell that bit of the trek story as well as words can. 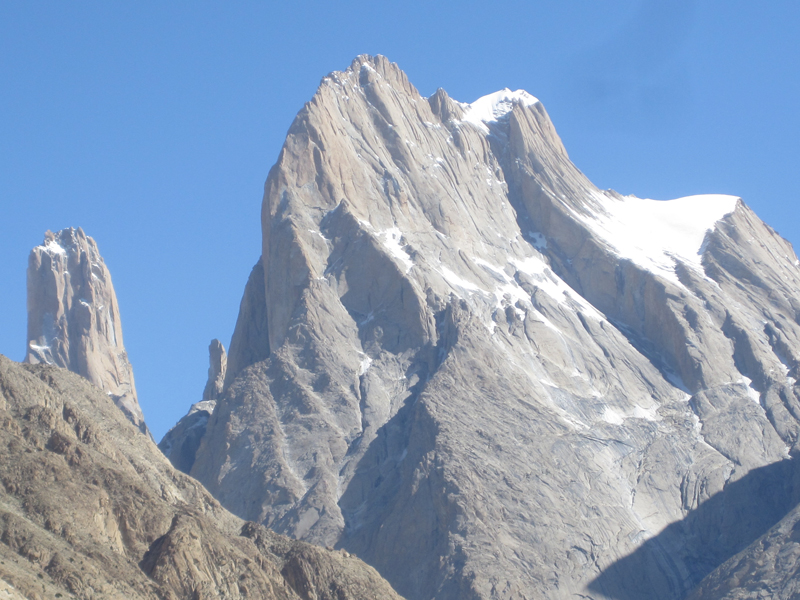 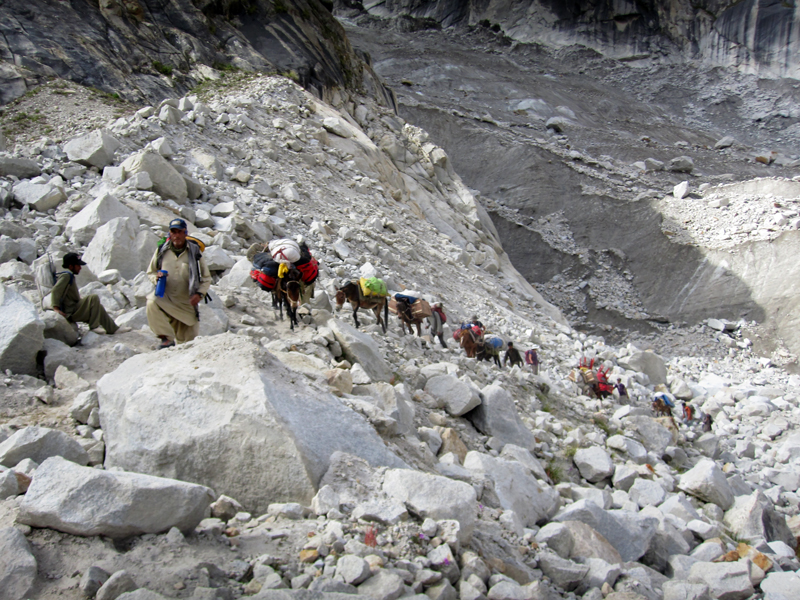 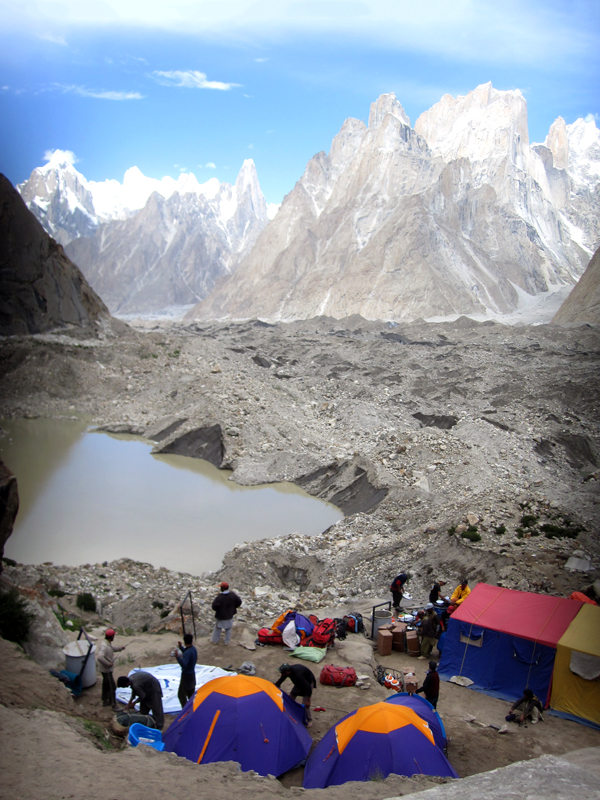 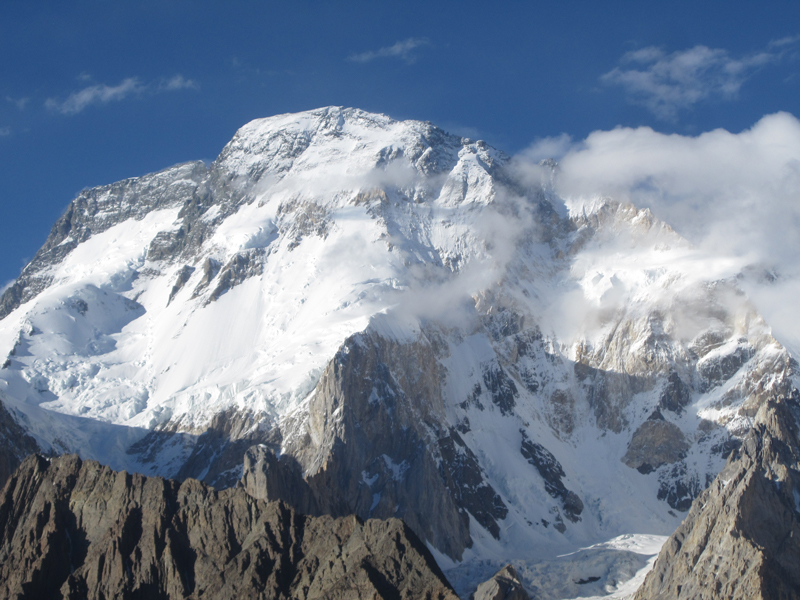 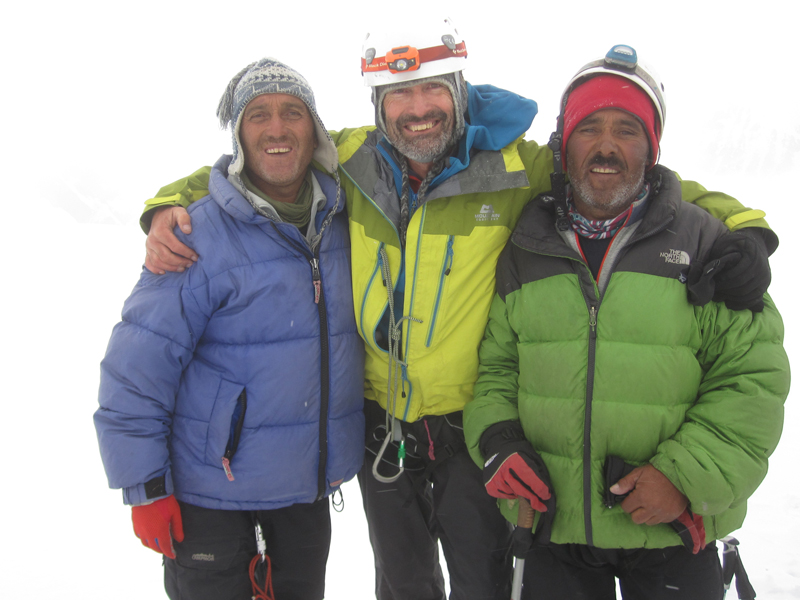 5. Tom with Karim and Mohammed Khan 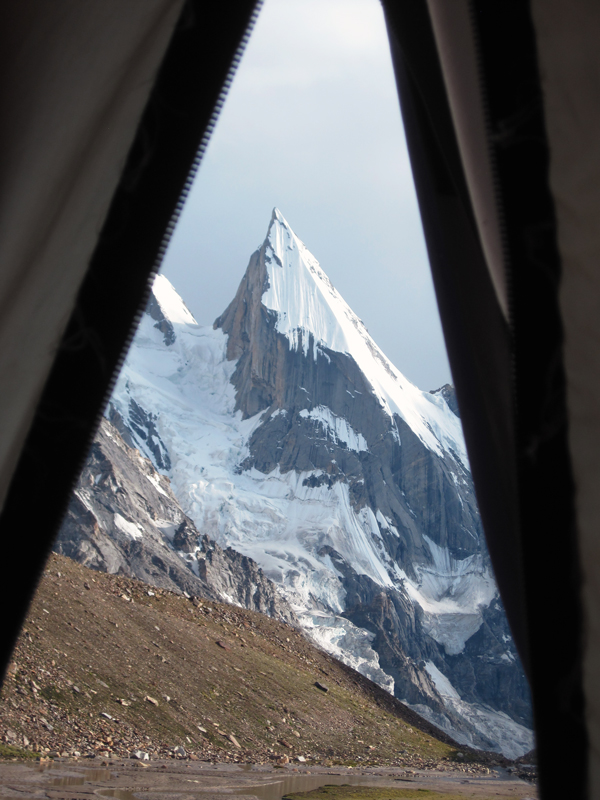 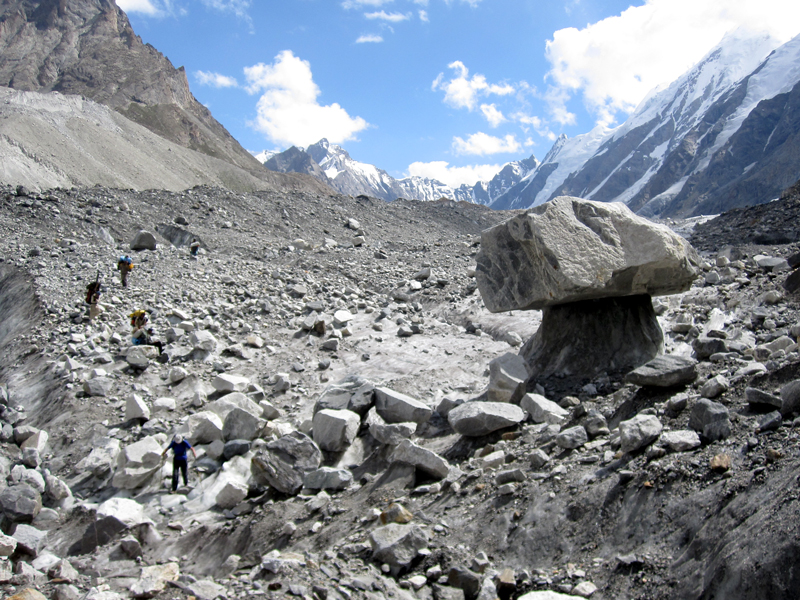