All change on the Daxueshan range

This entry was posted on 15th November 2019 by Tom Richardson. 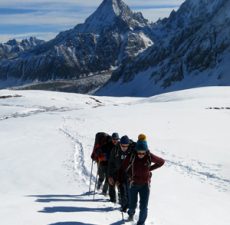 In the Autumn of 2019, I led my 4th trekking expedition to the Minya Konka Massif, in the Daxueshan Range in Sichuan China. It is a part of the world that is experiencing rapid changes on several fronts. Like all mountain areas, climate change is altering the weather patterns and taking its toll on the glaciers.

In 2016 and 17 I lead a group over the Buchha La (a steep narrow pass at 4900m) and we trekked on grass and rock throughout. Last year, on my third trip to the area, the snowfall was so heavy that we didn’t even reach the Pass.

At the same time Paul Ramsden and Nick Bullock, two of Britain’s most accomplished mountaineers, failed to get anywhere in their attempt at Minya Konka, the highest peak in the range. I wondered what I would find when I returned this year.

I say Minya Konka is the highest peak, but in the 1930s when foreigners first measured it, they thought it was higher than Everest at over 9000m. It wasn’t of course, but it caused quite a stir at the time! It is still pretty big at 7556m and it’s one of the 3 highest peaks outside the main Himalayan Range. The others are FYI Kongur 7719m, first climbed by Chris Bonington, Al Rouse, Joe Tasker and Pete Boardman in 1980, and Tirich Mir at 7702m in the Hindu Kush, climbed by Arne Naess' Norwegian expedition in 1950. 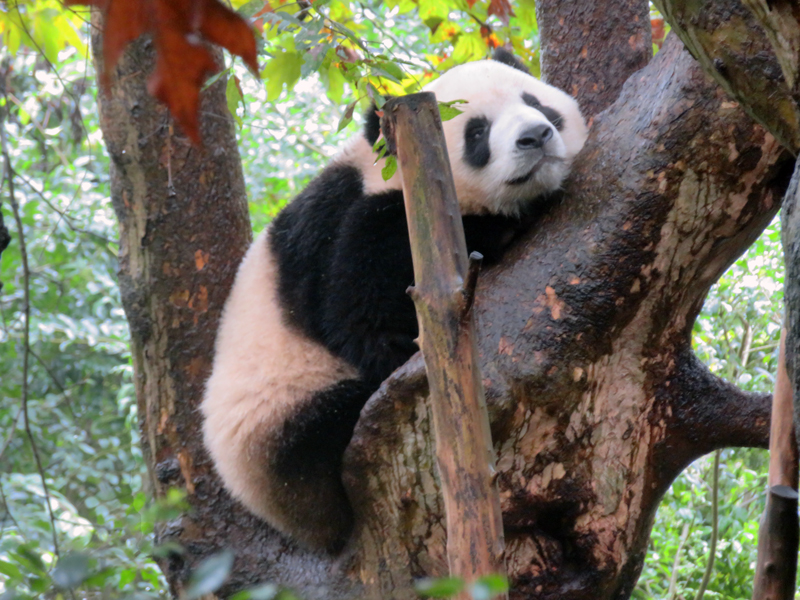 My first surprise was not the weather, but the breathtaking speed of what some people might call development. The Minya Konka Range is approached from the city of Chengdu, famous for the Panda Breeding Centre. It used to be a very long day’s drive via the city of Luding to Kangding, a sort of Chinese Chamonix. The road wound mostly along steep sided wooded valleys and past small settlements where fish were caught and served up in riverside cafes. 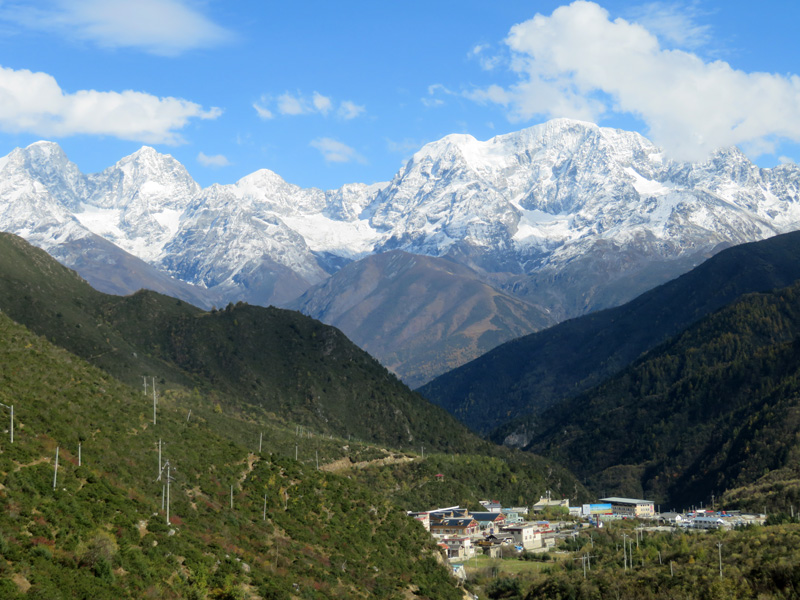 Kangding from the Tibetan Plateau 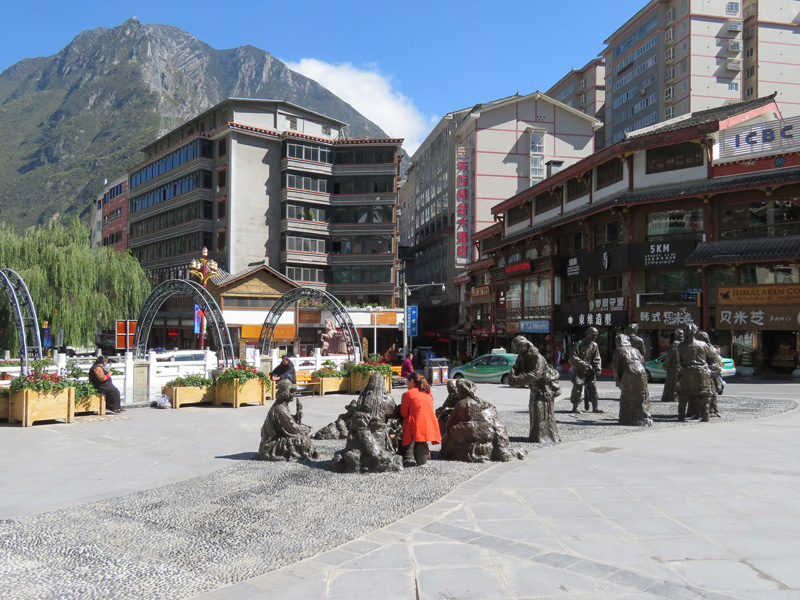 Not so now. From the city of Luding, where Mao Tse Tung’s army famously crossed the river on a wooden bridge that was burnt behind him to stop the pursuing Nationalist forces, a tunnel takes you all the way there through the mountains.

It’s impressive civil engineering but about as interesting as travelling the length of the Northern Line, minus the stations. Apparently, the next step is to flood the valley we used to drive along, to create hydro electricity and water for Chengdu and beyond. It’s termed progress.

And all that was before we even reached the mountains.

In Kangding we stayed with a good friend; the local head horseman, Gong Xue. He and all the local people are ethnically and culturally Tibetan, from an area called Kham. He and his fellow horsemen and women are sort of the Eddie Stobart of the area, freighting goods from north to south and back across the Range and over the high passes. Gong Xue knows the conditions and his horses like no one else.

Our first day trekking was above a temperature inversion, under beautiful blue skies surrounded by frosted pine trees with high alpine peaks beyond. As evening fell, the clouds that had hung in the valley all day crept up and rain began.

We made camp on the evening of the second day below the Matterhorn-like Riuchi Konka. Soon after we had gone to bed a violent storm hit. Thunder and lightning shook our tents while wind and heavy snowfall battered us. Our kitchen tent collapsed under the weight and I spent part of the night clearing snow from the group’s tents.

The next morning as I did a round of the tents and took bed tea to the group, it was clear that until something improved, we couldn’t move upwards. The horses couldn’t walk over rough rocky ground covered in deep snow. 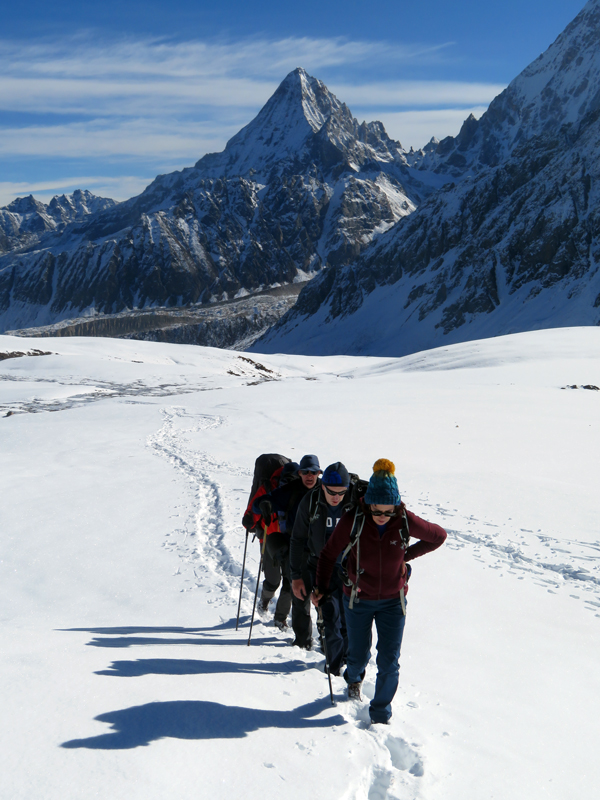 After breakfast we headed up the valley in our planned direction, breaking trail with the intention of returning to the previous night’s camp. As we reached our planned high point by a small hut used as a base for climbers on Jiazi and Mount Grosvenor, we were met by several other groups coming down, having given up.

Back at our camp later that day, Gong Xue and I discussed the problem. We don’t share any common language, but we get along fine with mime, laughing and handshakes. He thought that if the weather didn’t get worse, we could move on the next day and camp by the hut. We had lost a day from our itinerary so completing the trek on time would be tricky.

On arrival at the hut the next day the weather was still good, so I proposed that I hike up the snow slopes that began near us and extended up to the Buchha La. I took photographs of the snow conditions, the depth of my steps as I went, and the herds of ibex on the lower slopes.

Back at the hut Gong Xue studied my pictures closely, laughed at my selfie at my high point, slapped me on the back and indicated with an arm gesture and a big grin through his beard that we would try. I liked his optimism but doubted that the horses would make it through steep, thigh deep snow. 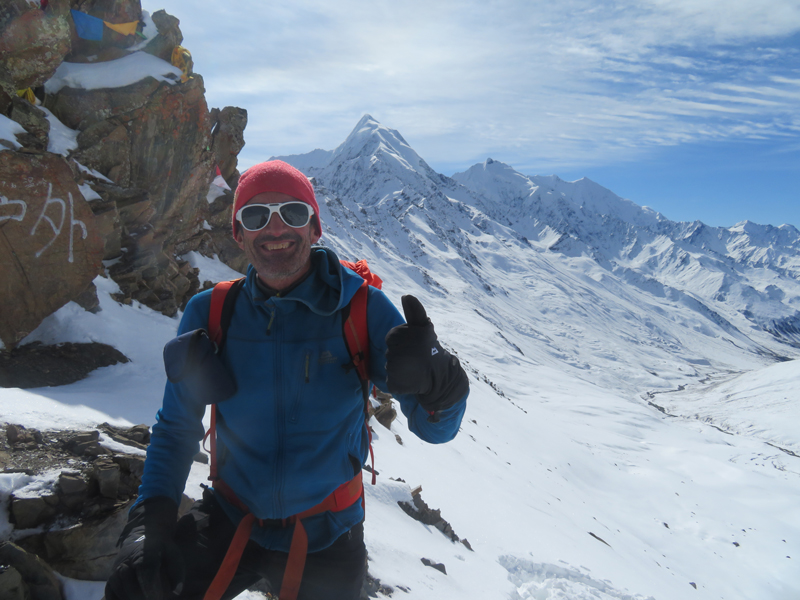 The view down the Moxxi Valley

Two young Chinese guys had also followed us as far as the hut. One seemed to be going strongly, the other not. I asked them if they knew where they were going; they said yes, and immediately headed off in the wrong direction. After an hour or so of wandering about they returned to the hut and had more discussions. One went down and the other unofficially tagged on to us.

The next morning, we left early and retraced my steps towards the Buchha La. As we progressed we all became more and more sceptical that the horses would get there. We were amazed and delighted when suddenly they passed us and ploughed their way through the final untrampled deep snow up to the narrow pass and disappeared down the other side.

We camped and trekked for a further two nights and three extended days to make up lost time. As we descended the Moxxi valley we were flanked by snow clad peaks, glistening lakes and tumbling glaciers. Emerging from thick forest, we finally reached the Minya Konka Gompa (monastery) in thick cloud, with no view of the mighty Minya Konka mountain that rises precipitously above.

Our disappointment was minimised by the thought that on our final day before returning to Chengdu, we would drive up to a 4000m+ viewpoint, where we would wait for the dawn light to break over Minya Konka.

It was not to be. Five minutes after setting off up the steep road to the viewpoint, the rain turned to snow. A further five minutes later, snow chains were fitted and finally only two of our three vehicles made it through the blizzard that was by then in full swing. Of course there was no view, however most of our attention was taken up by getting down below the snowline on the other side, and breakfast Tibetan style in a local village far below. 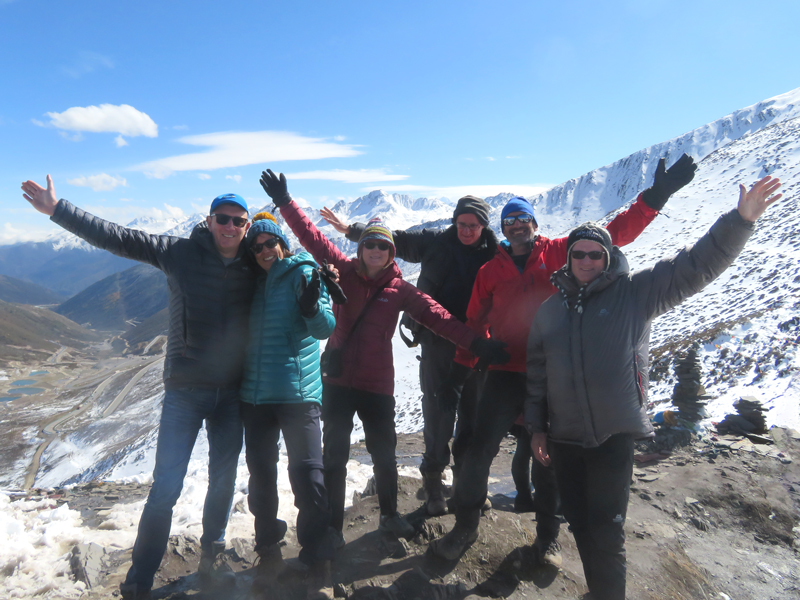 Finally Minya Konka is in sight

Two days later though, just before we descended from the Tibetan Plateau in our bus, we did climb a small viewpoint. There sure enough we did finally see Minya Konka in the distance. It didn’t let us down. 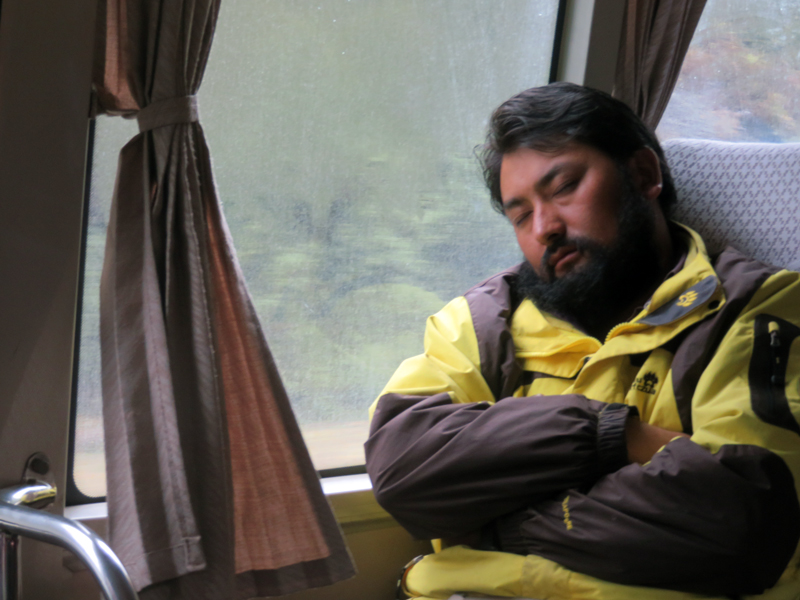 Gong Xue asleep on the bus

On our drive back to Chengdu we also took the old road, avoiding the tunnel, for a last glimpse at a world that might soon be gone.

One thought on “All change on the Daxueshan range”