This entry was posted on 19th November 2020 by Tom Richardson. 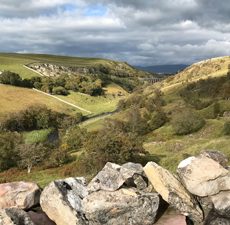 The Coast to Coast Walk is an approximately 190-mile, unofficial and mostly unmarked* long-distance footpath in Northern England. It was devised by Alfred Wainwright (AW) and published in 1973. It passes through three delightful and contrasting National Parks: the Lake District, the Yorkshire Dales, and the North York Moors.

Unlike official “National Trails” such as the Pennine Way which follow a specific marked route, AW's route uses existing footpaths and anticipated the future by encouraging walkers to choose to vary from his route according to taste, fitness levels, weather and erosion. However the fixed start is the charming village of St Bees on the West Cumbria coast, and the finishing point is Robin Hood’s Bay on the Yorkshire coast. 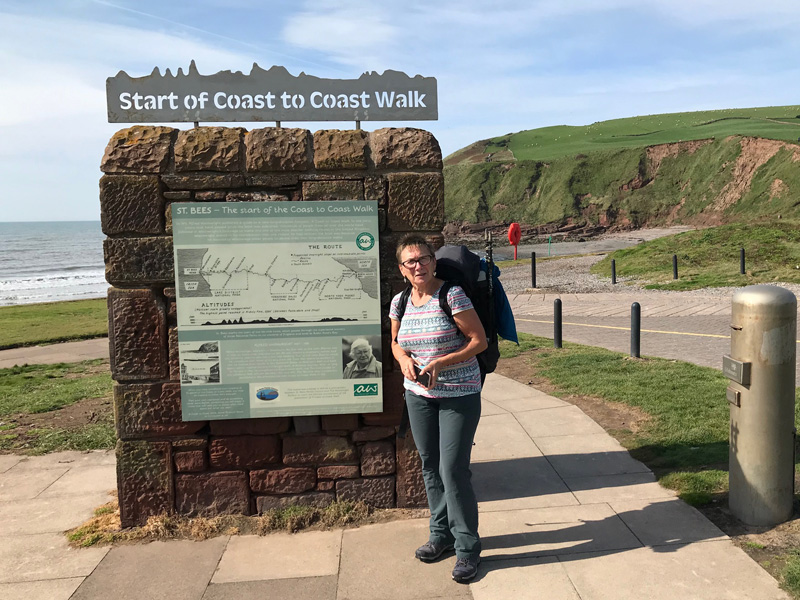 Janet at the official Coast to Coast start at St Bees

Today walkers adopt a variety of different styles in which they complete the Coast to Coast. The absolute purist would do it in a continuous journey carrying camping gear. Others, like us, might carry their own gear but stay in Youth Hostels and B&Bs along the way and perhaps break the journey into sections to fit it in around their work/family and other commitments.

In recent times a third style has crept in. Whilst I’m all in favour of people earning an honest living, having your luggage transported by a taxi service between stops, and carrying only a jacket with an apple in your pocket (as we witnessed), drastically diminishes both the experience and the margin for safety across a lot of high and wild country. I know, I’m a curmudgeonly old whatsit, but style in long distance walking, like rock climbing, alpinism and mountaineering is important for many reasons. 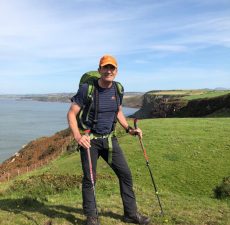 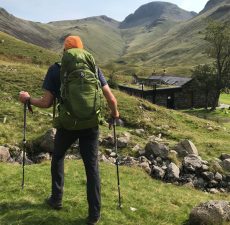 Tom near Black Sail hostel with Great Gable behind

If you are planning a Coast to Coast expedition or even just a long walk, you should carry and be able to navigate with both a map and compass. Take digital devices but do not rely 100% on them; batteries fail, screens smash if you drop them on the rocks etc. I do however strongly recommend carrying a mobile phone, even though you won’t get phone service everywhere and you should turn it off, so it’s charged when you need it. Install the OS Locate app - it will give you your grid reference and act as a back-up compass if you get disorientated in cloud on the high moors.

We planned to complete our Coast to Coast in four sections on my weekday days off from Outside. Section 1 began on 14th September 2020 and was St Bees to Shap over 4 days. It’s a great expedition in itself, crossing the Lake District over high peaks (Kidsty Pike is the highpoint of the C2C) and passes (Greenup Edge), along beautiful lakes (Ennerdale Water) and past historic locations such as Pillar Rock, the remote Black Sail Youth Hostel and including a view of Helvellyn from the high above Angle Tarn. 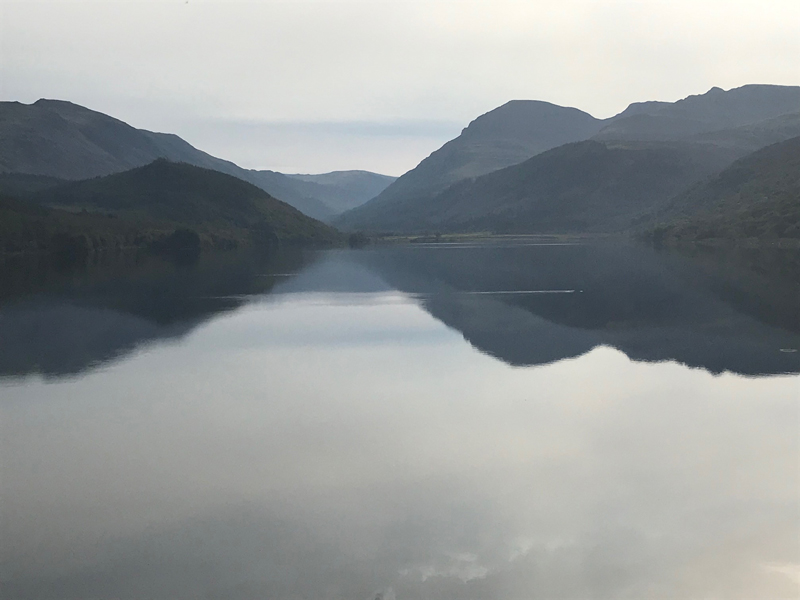 Section 2 crosses the Yorkshire Dales. It began for us on the 5th October with a taxi from Penrith to Shap and a roaming 20-mile traverse to the ancient market town of Kirby Stephen, with unusual views of the Howgill Fells, normally seen side on from the M6 motorway. A big climb out of the town the next morning lead to one of the most dramatic summits in the Dales, 9 Standard Rigg. From there the guide book offered three possible routes through the varying depths of bog, depending on the time of year. The overnight accommodation is in Keld. There is a choice of a Mongolian Yurt, an excellent bunkhouse, your own tent or an inappropriately posh hotel in the middle of nowhere. 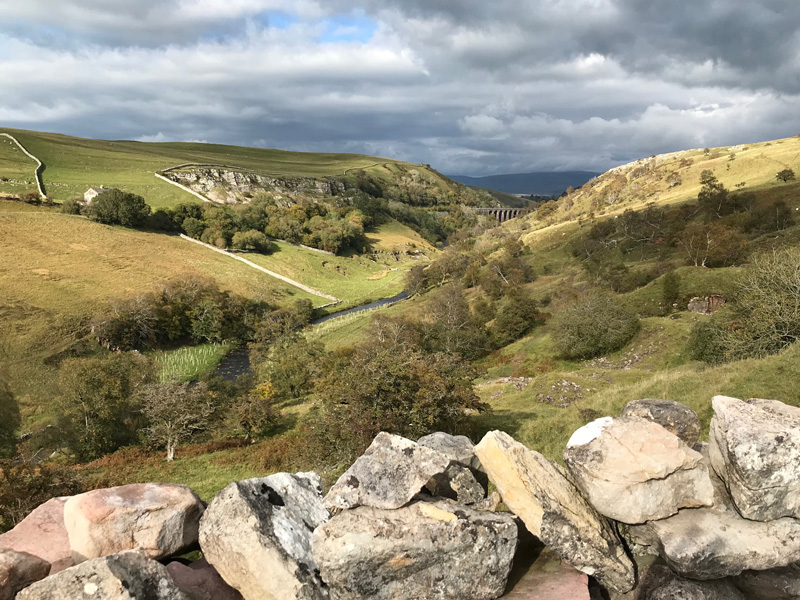 The following day is in two parts, firstly crossing a rather desolate but interesting former industrial landscape, where hard lives were lived high up on the now peaceful moors in dangerous and polluted environments. Shortly afterwards we experienced the delights of the most Yorkshire of Yorkshire villages, Reeth. The final, gentler day leads to the country town of Richmond, from where a scheduled bus took us to Darlington and a train home. 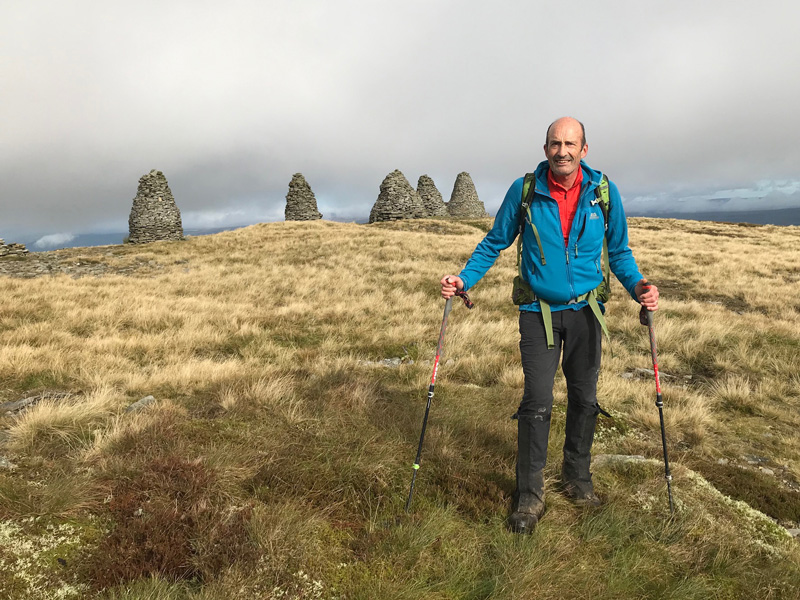 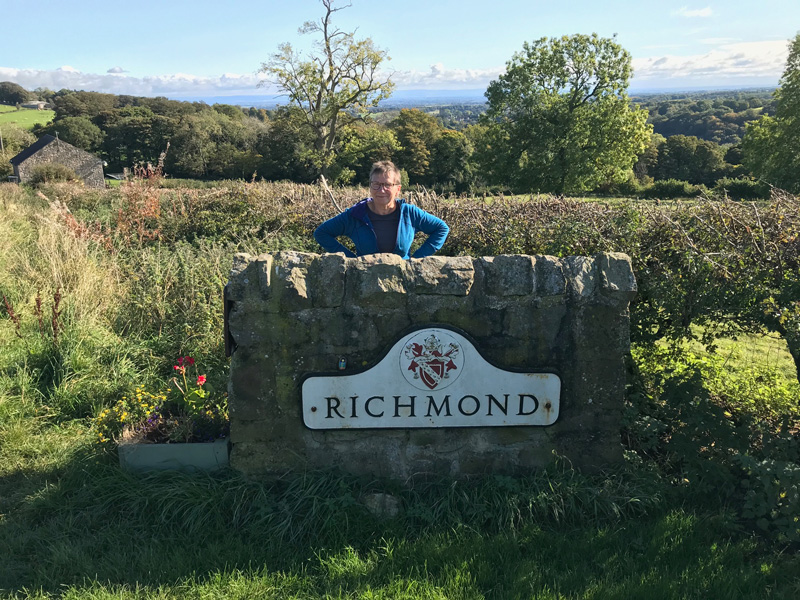 Stage 3 was to have begun in Richmond on 26th October and taken us to the edge of the North York Moors. Stage 4 was booked to follow on 9th November across the North York Moors to Robin Hoods Bay where a traditional celebratory pint was recommended by AW before we returned home. Unfortunately, we have had to postpone AWs suggestion, as Tier 3 took over our Stage 3 and then the second Lockdown arrived.

As on mountaineering trips, I’m disappointed but try to be philosophical. “If the outcome is certain, it’s not an adventure, just tourism.”

On the plus side, with a bit of luck we might get to do the rest in full winter conditions when we are next allowed out to play! I might even have a paddle or even a swim in the sea to celebrate.

*These days the energetic members of the Wainwright Society have marked the route through some of the more obscure sections, with an AW sign but it’s best not to rely on them.