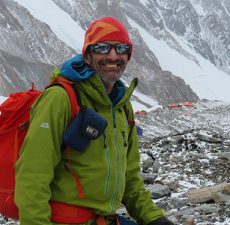 After a Scottish and Alpine apprenticeship, Tom Richardson began climbing in the Himalaya in 1979. Since that time he has climbed extensively around the world and has been on twice as many trips to the Greater Ranges as his age. This includes 7 expeditions to 8000m peaks across the Himalaya and Karakoram, both leading commercial groups and climbing with friends.

His favourite trip is, he says, usually the one he has just come back from, irrespective of whether it is from a remote corner of Mongolia or Pakistan or leading a commercial group on a Trekking Peak in Nepal.

Want to find out more? See tom-richardson.co.uk and the KE Adventures website.

This entry was posted in Shop News & Staff Blogs, Meet our team and tagged Tom Richardson on 24th February 2020 by admin. ← Previous Post Next Post →