This entry was posted on 9th August 2019 by Tom Richardson. 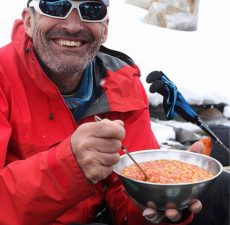 The summer of 2019 was my fourth consecutive season climbing and trekking in the Karakoram and overall my 13th trip to the mountains of Pakistan since my first visit way back in 1987. You’d be right in guessing that I like the place, who wouldn’t? If you like mountains and adventure, the Karakoram is without doubt the most dramatic mountain range on the planet, with 5 of the world’s 14 8000m peaks; K2, Broad Peak, Gasherbrum 1 and 2 and Nanga Parbat. Some of the most challenging and famous lower peaks such as Masherbrum, Gasherbrum 4, The Ogre, The Latok Group and Trango Tower are found there too, as well as literally thousands of lesser known peaks.

I was asked by KE Adventure Travel to lead two trips there. The first was to climb a small (by Karakoram standards) mountain called Gondogoro Peak (5650m). I was very keen for several reasons. Firstly, it is a great trip and secondly the idea of climbing a Karakoram summit in a two-week holiday seemed outrageous. It would require ideal conditions to do it in the tight time frame, but it was perfectly possible. Another reason was pure nostalgia. I had climbed the mountain once before in 1989 with my friend Joe Simpson. It was his first summit following his epic survival on Siula Grande in Peru a few years earlier (as recounted in his book Touching the Void). 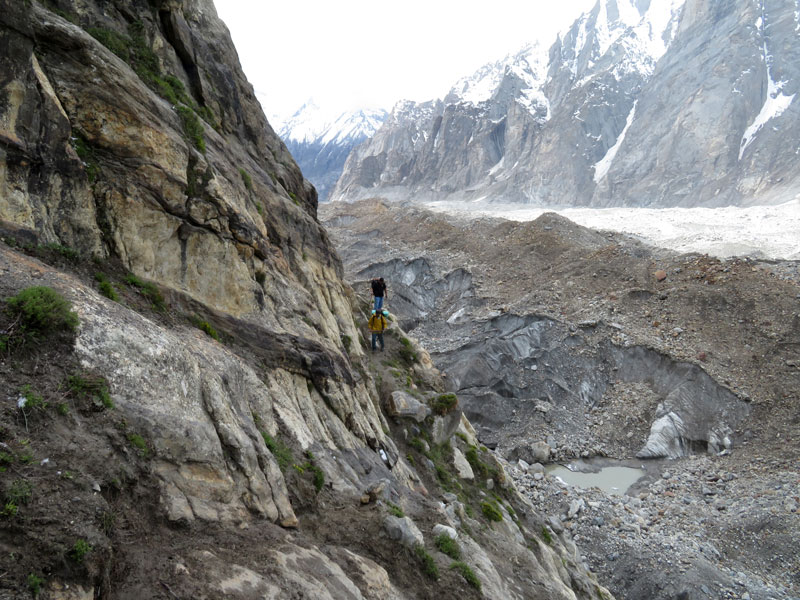 Point where donkey and duffel took a fall

Not everything goes to plan in life, especially in the mountains and this summer’s first trip was one of those that didn’t. Two days before reaching our proposed Base Camp one of our pack donkeys fell from the trail, down a cliff and died. I had previously questioned the lead horseman about the wisdom of taking donkeys on that part of the trail and he assured me that they did it all the time. It was a shocking and upsetting incident. The saddle and attached luggage also came off in the fall and plunged into a glacial lake below. My stuff was in one of the duffel bags and was all in a stout dry bag inside. It stayed afloat and dry inside. Fellow team member Phil’s was not. His sleeping bag, down jacket and everything else was soaked. We had spares with us, but it was not a good day. 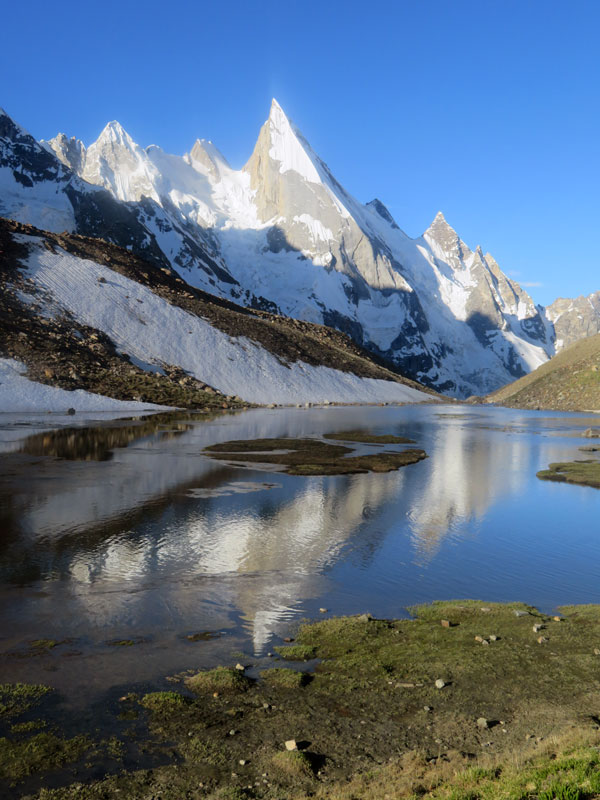 We continued on to the beautiful lake at Dalsan below Masherbrum, on the moraine above the Gondogoro Glacier. That night we camped on grass amid wildflowers, but as we left camp the next morning it started to snow. A substantial covering of fresh unconsolidated snow would stop our chances of climbing and create a considerable avalanche risk on steeper ground. Deepening snow and low cloud also made route finding difficult and several of the porters following in our tracks took off their glacier glasses to see better in the disorientating whiteness. It was a mistake, as within an hour or two of reaching camp, 5 of them were suffering from agonising snow blindness. Snowfall continued for 48 hours. Usually recovery from snow blindness takes about 24 hours and the only treatment is covering your eyes to keep light from the damaged retina, using soothing eye drops and painkillers. By the time everyone had fully recovered, the snow finally stopped, but all we could do was return back down the glacier. At least we were able to enjoy the sunshine and views that we missed on the way up. We watched the avalanches powering their way down the mountains on either side from a safe distance. The porters did likewise but this time kept their glacier glasses on. 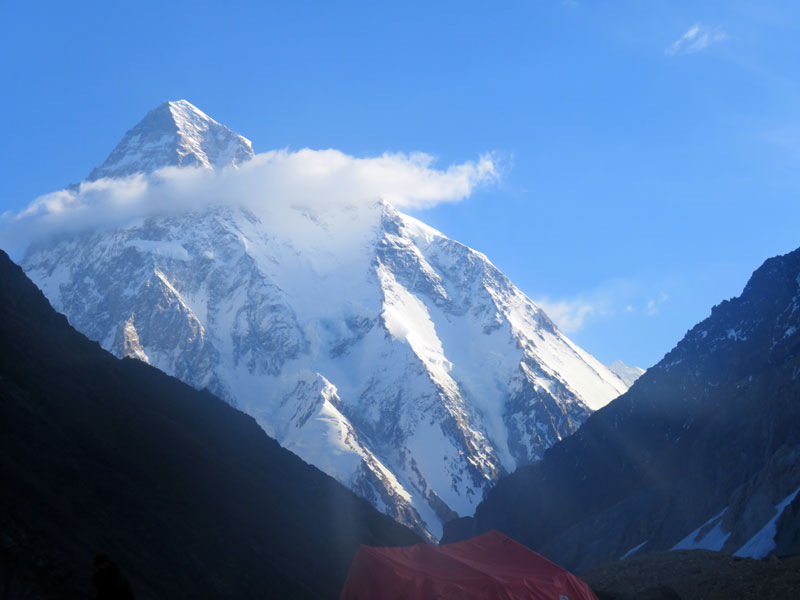 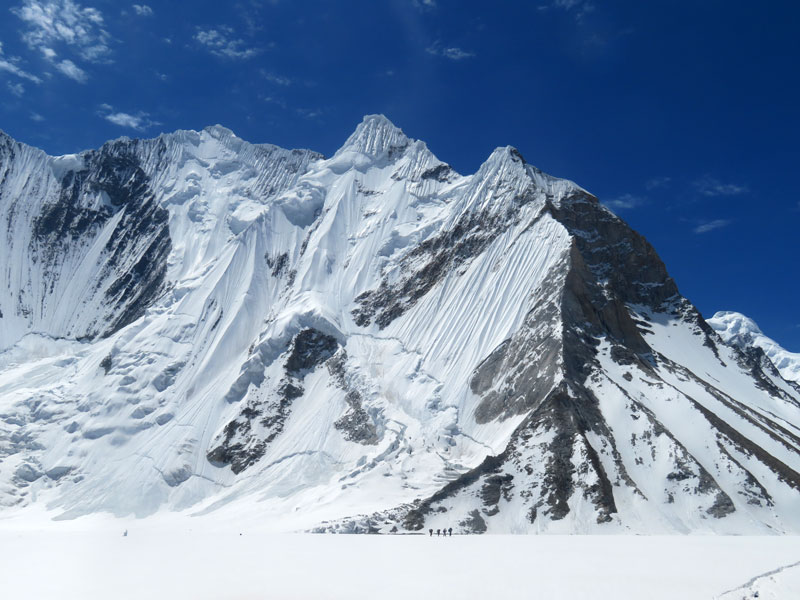 A week later I was on the other side of the Range leading another group on a longer trip up the Baltoro Glacier to K2 and Broad Peak Base Camps, and then across the Gondogoro La, a technical pass near to Gondogoro Peak and at about the same height. This is a climbing pass requiring the use of crampons and competence in both ascending and descending fixed ropes safely.

Ali Camp bivvy the night before crossing the pass

In contrast to the previous trip we had not far off 100% perfect weather. The snow that fell during the Gondogoro Peak attempt had consolidated by now, making the crossing of the pass more straightforward than usual and free from stone fall. Everyone in the group reached either Broad Peak or K2 Base Camps and crossed the Pass.

If the outcome was certain it wouldn’t be adventure, just tourism. 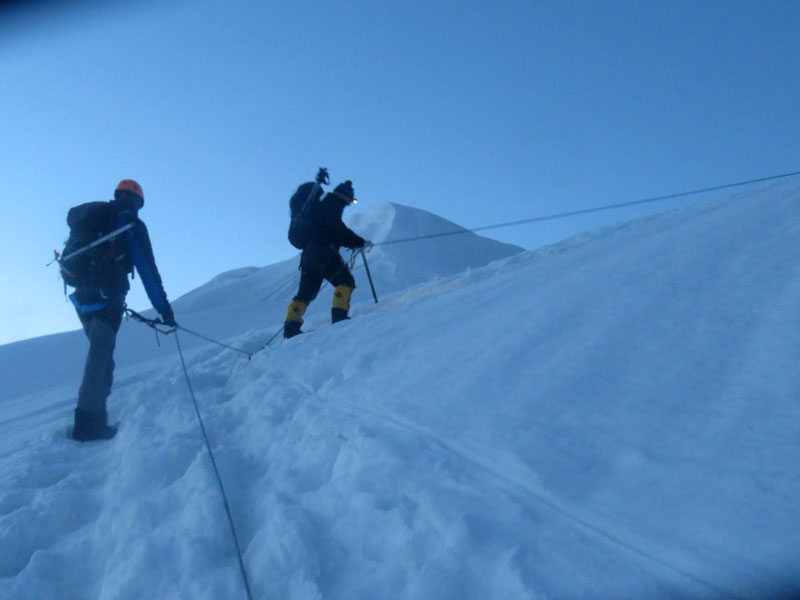 Nearing the end of the fixed ropes 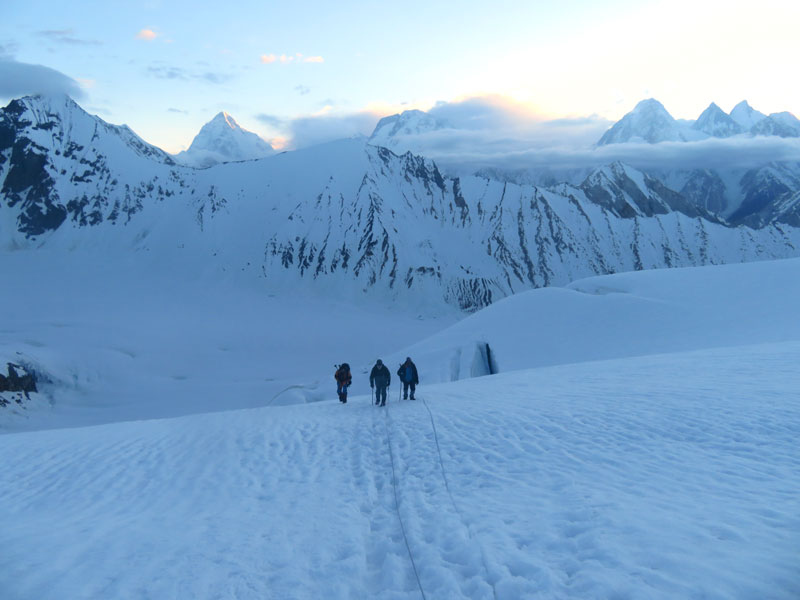 Approaching Gondogoro La with K2 beyond 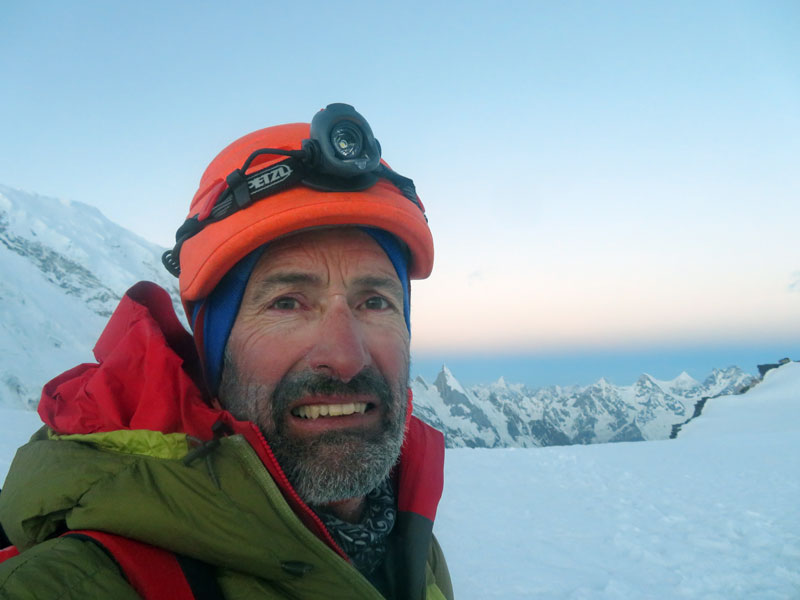 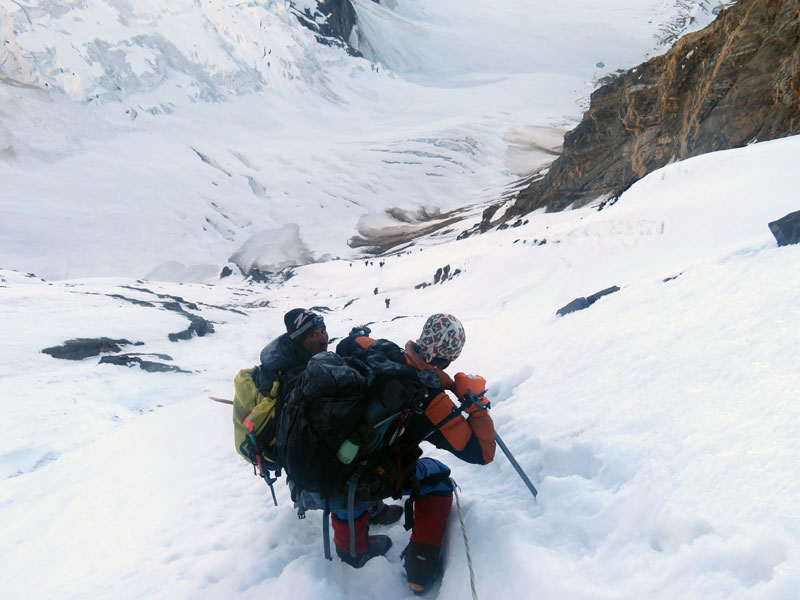 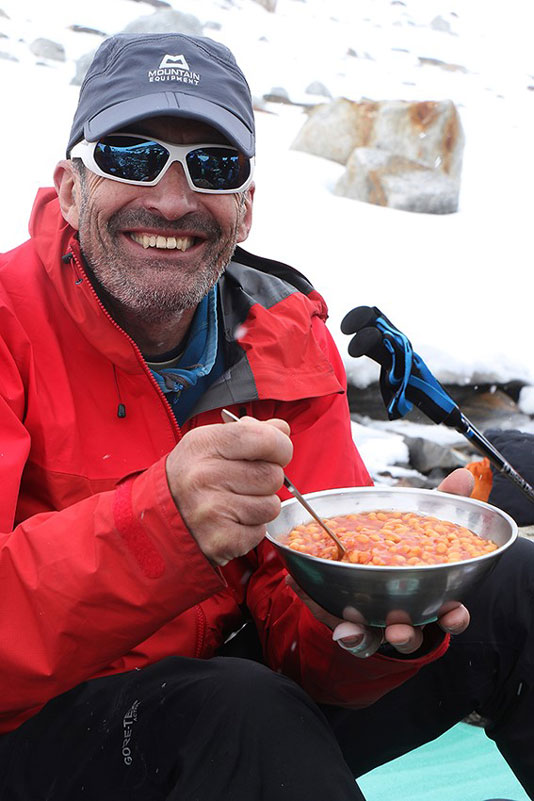