Kayaks in Scotland, canoes in Essex

This entry was posted on 8th July 2019 by Chris Harle. 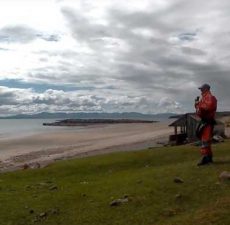 Sea kayaking on the north west coast of Scotland and canoeing on the River Stour on the borders of Suffolk and Essex provided polar opposites of paddling experiences during June.

My annual trip to Scotland with Martin, a friend from the Gower in south Wales, was a continuation north from where we finished last year’s trip near the picturesque village of Plockton. Having driven all-day, it wasn’t until gone 8.30pm when we set off. Packing the boats had been a fraught and careless business having been harried by a swarm of midges in the calm and damp conditions. The short paddle on silky smooth waters around the headland to a known wild campsite was a brief respite from the midges. Tents were erected in record time on a bed of bluebells and primroses before we escaped to rocks adjacent to the sea to cook dinner. 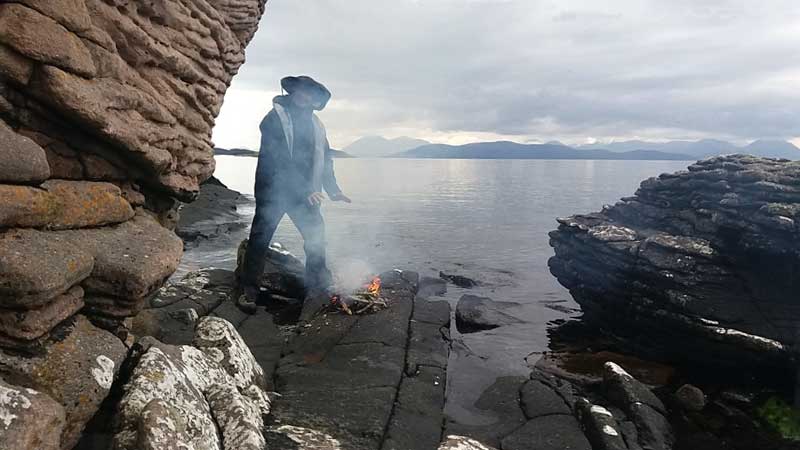 Keeping the midges off in Plockton

Our first full day of paddling took us part way round the Applecross peninsula. We briefly stopped at the remote Uags bothy with its views across the Crowlin islands to Skye beyond, before moving onto the village of Applecross where we replenished our supplies of water. Once again, our overnight camp was blighted by midges; a head net and constant spraying gave scant protection. Later, a slight breeze cleared the midges and gave Martin the opportunity to practise his wilderness first aid skills. Surgery from the previous week resulted in the need to remove twelve stitches from my face. With borrowed glasses and steady hands Martin did a great job.

During the following day there was continual interest along the coast with the isles of Raasay and Rona as our constant companions five miles away across the Inner Sound. Rounding the northern extremity of the peninsula into Loch Torridon we found our next campsite in a small bay served by a stream with clear freshwater. No midges but disappointingly no driftwood either. I just love being able to light a fire on the beach, but it wasn’t to be on this occasion.

Although the final day’s paddle was the longest and toughest it proved to be the most memorable. It started with a crossing of Loch Torridon to the pier at Lower Diabaig situated in a stunning bay surrounded by mountains and sweeping slabs of rock renowned for its climbing.

Paddling northwest into a strong headwind was quite taxing, but you didn’t dare stop for fear of losing hard-fought ground. Our reward for this effort was several sightings of otters both in the water and scampering along the rocky shoreline and then reaching the perfect lunch spot at Red Point sands. We re-energised with a brew up, sandwiches and snack bars and simply stared at the view.

It was a late finish by the time we reached Strath near Gairloch and trolleyed the loaded kayaks up the road to a proper campsite, where flat grass, a shower and other facilities were much appreciated. Retrieval of our vehicle, a fabulous bookshop/coffee house, more kayaking on Loch Maree and wet weather kept us occupied for the rest of the week.

Three weeks later and over 600 miles further south I went on a two-day canoeing trip with my older brother Neil in the scenic Constable country of the River Stour. With limited time available to us I took the easy option and used an outdoor equipment hire company to look after the logistics. Unlike me, with my Utopian world of part-time book buying and event organising at Outside, Neil and his wife run their own insurance business in London where he spends most hours of most days sitting in an office dealing with the day-to-day demands of self-employed work. So, for many reasons these two days were precious. Dire warnings of thunderstorms were duly ignored, and we set off from Bures to enjoy the peace and tranquillity of this border river. There were a few short portages around weirs, but they were relatively easy with nothing but our packed lunch to carry in addition to the canoe. 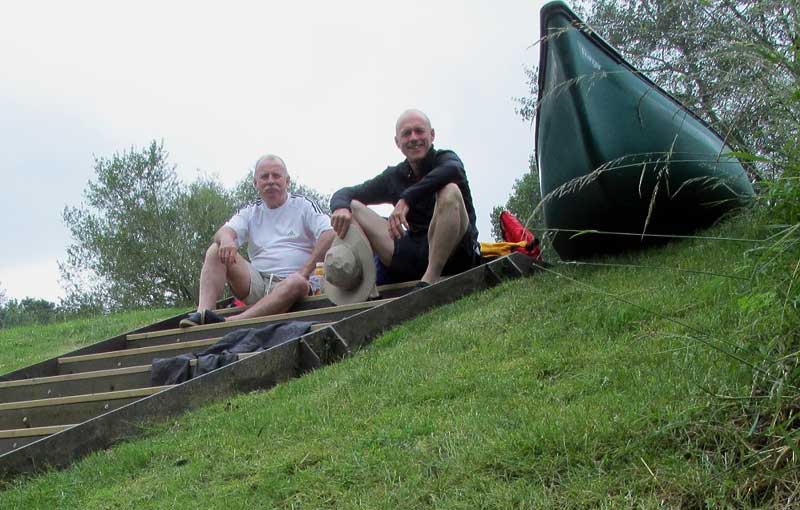 Along the way we spotted a great spotted woodpecker, kingfisher, heron, buzzard, and even the elusive cuckoo. There was also a mysterious and pungent smell that occasionally wafted out of the riverside - something like the smell of popcorn. Google searches have not yet given me a satisfactory answer. The forecast rain started some while before we reached Nayland, where a pre-erected bell tent with all equipment waited for us at a farm campsite. With no other campers we had exclusive use of a posh portaloo, tap and sink, fire pit / BBQ and comfy chairs. All we needed now was for the rain to stop. On cue it did just that and out came the beers, burgers and sausages. I’d also bought plenty of dry wood to light a fire and the couple of hours weather window was just enough to enjoy a relaxed evening.

That night we were assailed by thunder, lightning and torrential rain although Neil was oblivious to the fact as he slept through it!

The next day paddling to Stratford St Mary was equally enjoyable. Despite the rain the river levels seemed no higher, but its character was constantly changing - from wide open vistas and easily navigable sections to dark and overgrown stretches where choosing the right line through fallen trees and tall reeds was anything but obvious. 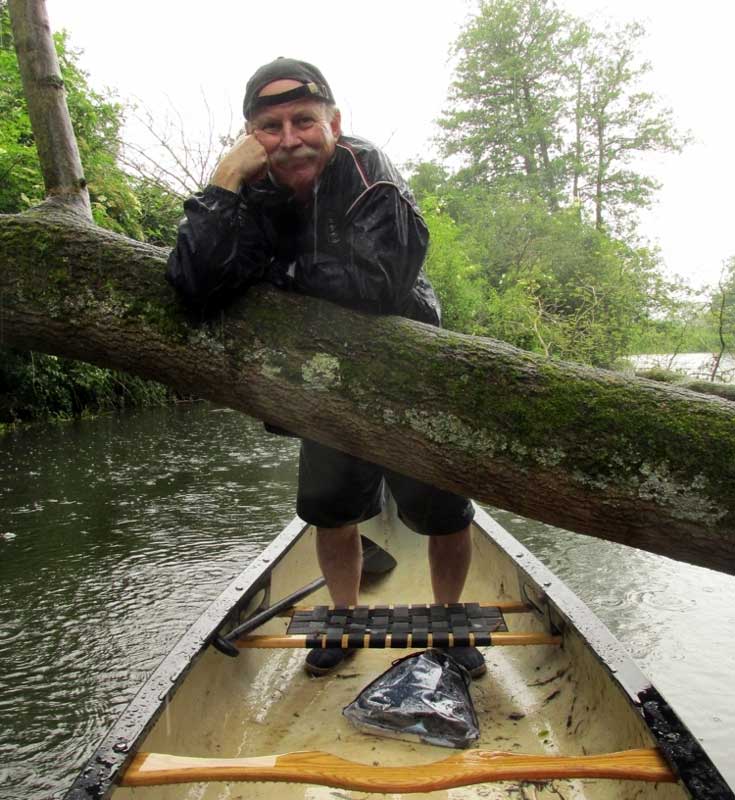 Remarkably on the journey we saw no other people or canoeists apart from two fishermen and the campsite owner. By the way, ignore the stereotype of what you imagine Essex and its people to be like. Take yourself out of the confines of Greater London and explore the countryside, villages, river estuaries and coastline - guess where I come from originally!