Two out of three ain’t bad - expeditions in Mongolia

This entry was posted on 24th September 2019 by Tom Richardson. 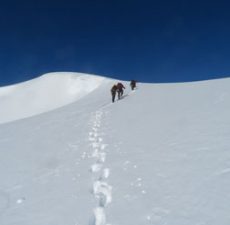 A popular cliché of a decade or so ago was that you can’t step in the same river twice. Although from a distance it might look the same, the water, vegetation, animal life, state of the banks and so on have changed. This is also true in mountains; you can’t climb the same mountain twice, either.

I first visited the remote far western end of Mongolia, a mountain range known as the Altai Tavan Bogd, way back in 2004 and I have returned many times since. In many ways the area is similar to the Alps, having peaks above 4000m and several huge and impressive glaciers. In other ways it is quite opposite. There are no roads, no towns, no chairlifts and no crowds or any of the other paraphernalia we see in Europe’s mountains. 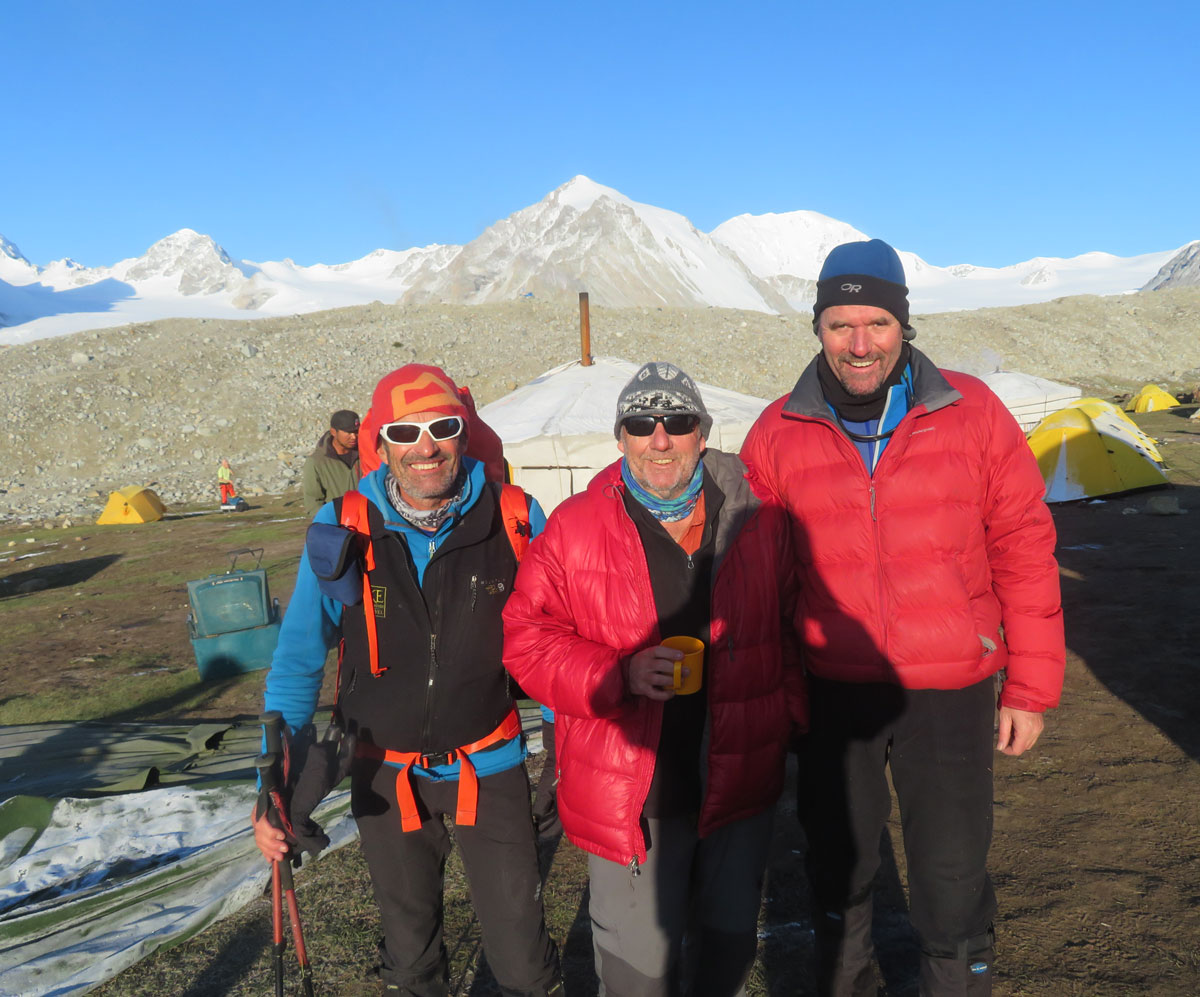 Meeting old friends - with Ade the Welsh Nomad and Graham

As with the river, the mountains look the same from a distance, but as you get closer there are differences. On my first trip we were alone at Base Camp, but this year there were several other groups of both trekkers and climbers there. Who can blame them? It’s a fantastic place and like the old campsites of Chamonix you can often meet up with old climbing friends here, both Mongolian and foreign. Amongst them this year was the first Mongolian (a woman) to climb K2 and the first Mongolian to climb Everest. I also met a semi nomadic climber/trekker friend from South Wales, with whom I first climbed Khuiten, the highest peak in the area, in a one-night round trip from Base Camp in 2004. He was returning from the summits carrying an enormous pack and proudly showed me the X rays of his two new titanium hips! 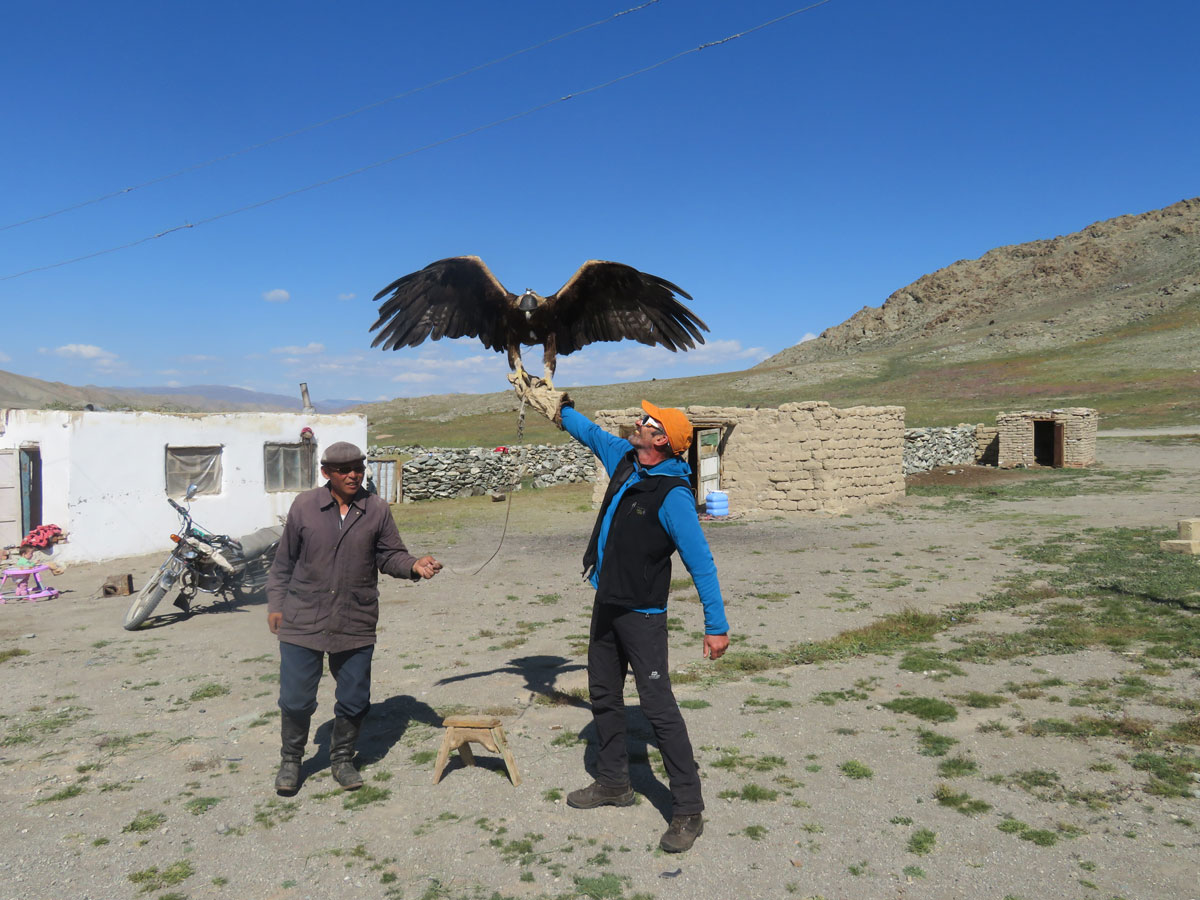 Checking out a nomad’s hunting eagle!

The other not so obvious change is visible when you look at the vast Potaniin Glacier. The snout has retreated several hundred metres during the very short time (in glacial terms) I have been visiting. Summers in Mongolia are famously brief and winters are long and cold, so for me this is quite a shocking change – although minimal in comparison to the annihilation of the European glaciers during the same period.

The Altai mountains form the border between Mongolia, China and Russia. They are a long way from the sea and the weather during the brief summer is usually, but not always good. We had snow at Base Camp on several days and although it burned off from the grassy campsite, it accumulated high up on the glacier, obliterating previous trails and filling in crevasses.

All my visits to this area have been leading groups for the Keswick based KE Adventure Travel, with whom I have worked since 2001. After a few days of acclimatisation and instruction in glacier travel, we set off up the glacier to make a high camp. From there we aimed to tackle both the highest peak (Khuiten) and the slightly smaller Narindal, that marks the spot where Mongolia, China and Russia meet.

We carried heavy loads including tents, food and fuel for all ten of us. My load contained amongst much else 8 litres of petrol. It was tricky going circumnavigating the crevasses. As the snow cover developed they became impossible to even spot as a slight indentation white surface, so we probed the blank snow with trekking poles to find and avoid them. With only about an hour to go to reach the High Camp I was relieved to see a line of three marking sticks ahead showing, I assumed, a way through the last major section of crevasses.

The next thing I knew I was hanging about 3 metres down inside the narrowing crevasse, jammed by my pack with icicles tinkling down all around me. The crevasse dropped below me into blackness. I had an excellent anchor of 5 clients on the rope behind me, but it took quite a bit of effort to climb out. 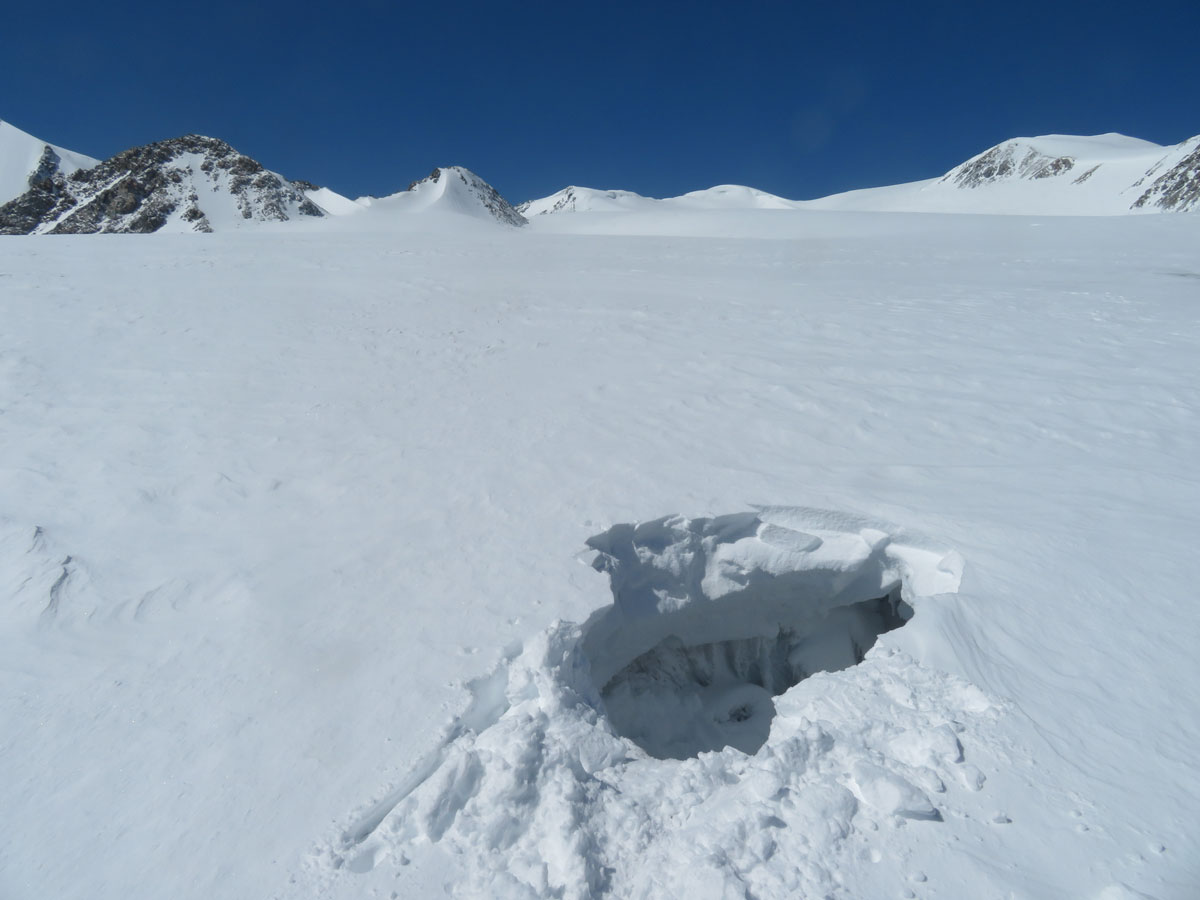 By the time I reached the daylight again, my friend and Mongolian agent Graham Taylor had arrived. He took a turn at the front making a route further left and within minutes he too had fallen through the deep, soft snow into a crevasse. By the time we had got him out our Mongolian friend and guide Ushko arrived and working his way further left again found a route that just required big steps or small jumps over the tapering crevasses. The purpose of the line of sticks was never clear!

Later from High Camp, whilst I was cooking dinner for the group, I could look across to Khuiten, our main objective. I have climbed it many times by two different routes, but now it was unlike any time I had seen it before. On the left-hand side of the face is the original route. It is mostly on steep snow slopes with a couple of pitches of steeper climbing, all of which require care both in ascent and descent. On the far right of the face was the easier route that runs alongside the Chinese border to the summit ridge; these days my preferred route for KE groups. Between these two you could clearly see that the whole face had collapsed into an enormous slab avalanche. Both routes would be likely to be ready to release at any time and debris would still be falling down the avalanche track between them.

We turned our attention to the safer and easier angled Narindal. Everyone reached the summit and therefore visited all three countries. 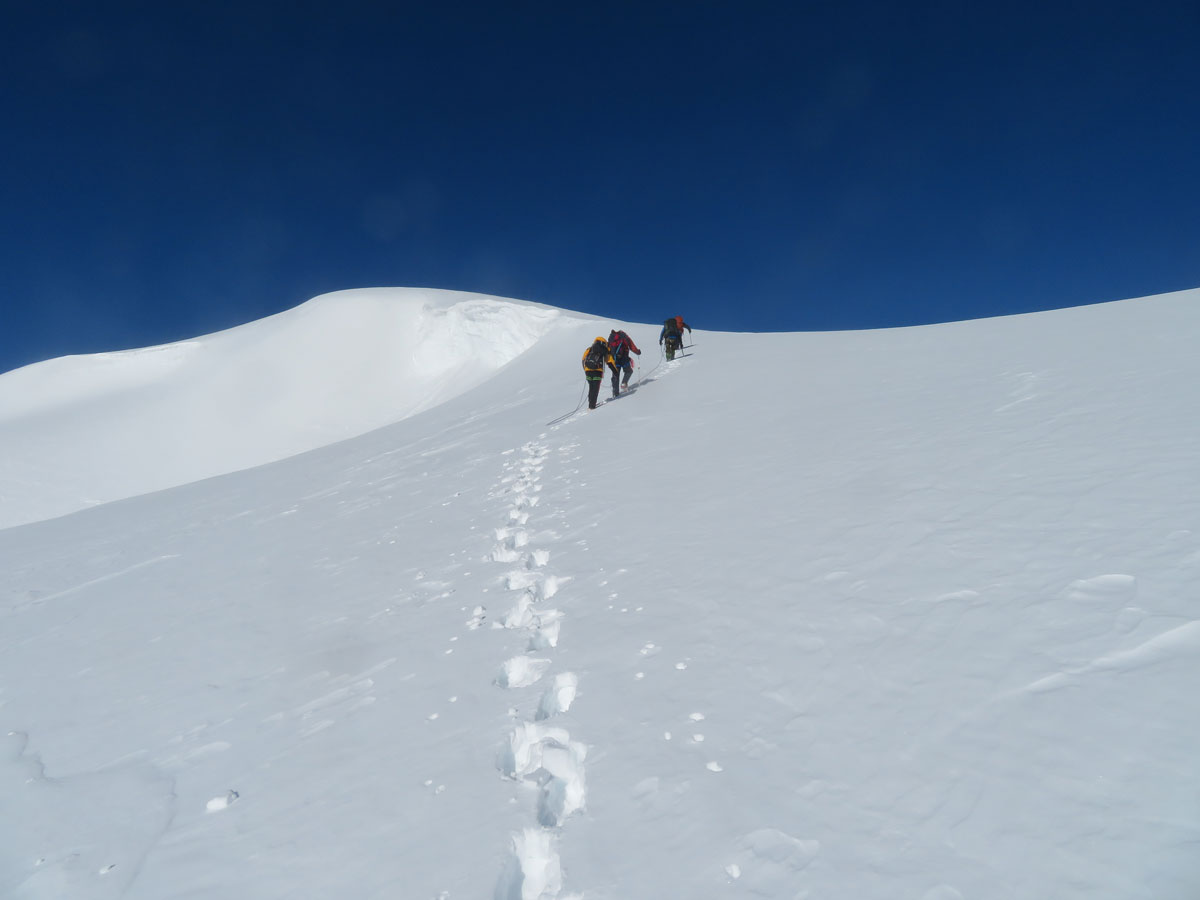 The summit slopes of Narindal. 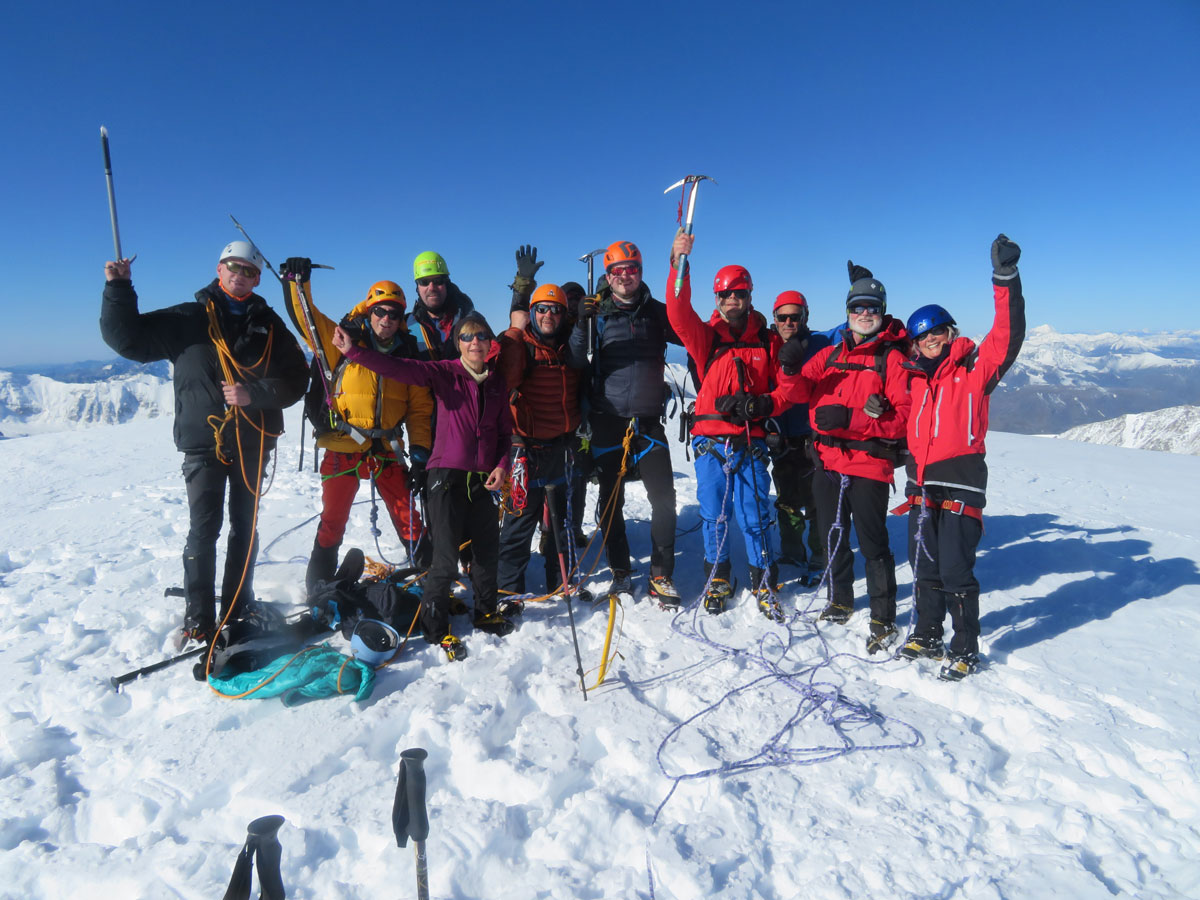 We returned down the glacier with hearts in our mouths but without incident. The next day Ushko and I took two members of the group up the scrambly rocky 400m peak of Malchin, and Graham took the others up the walk-up peak Gejadein. 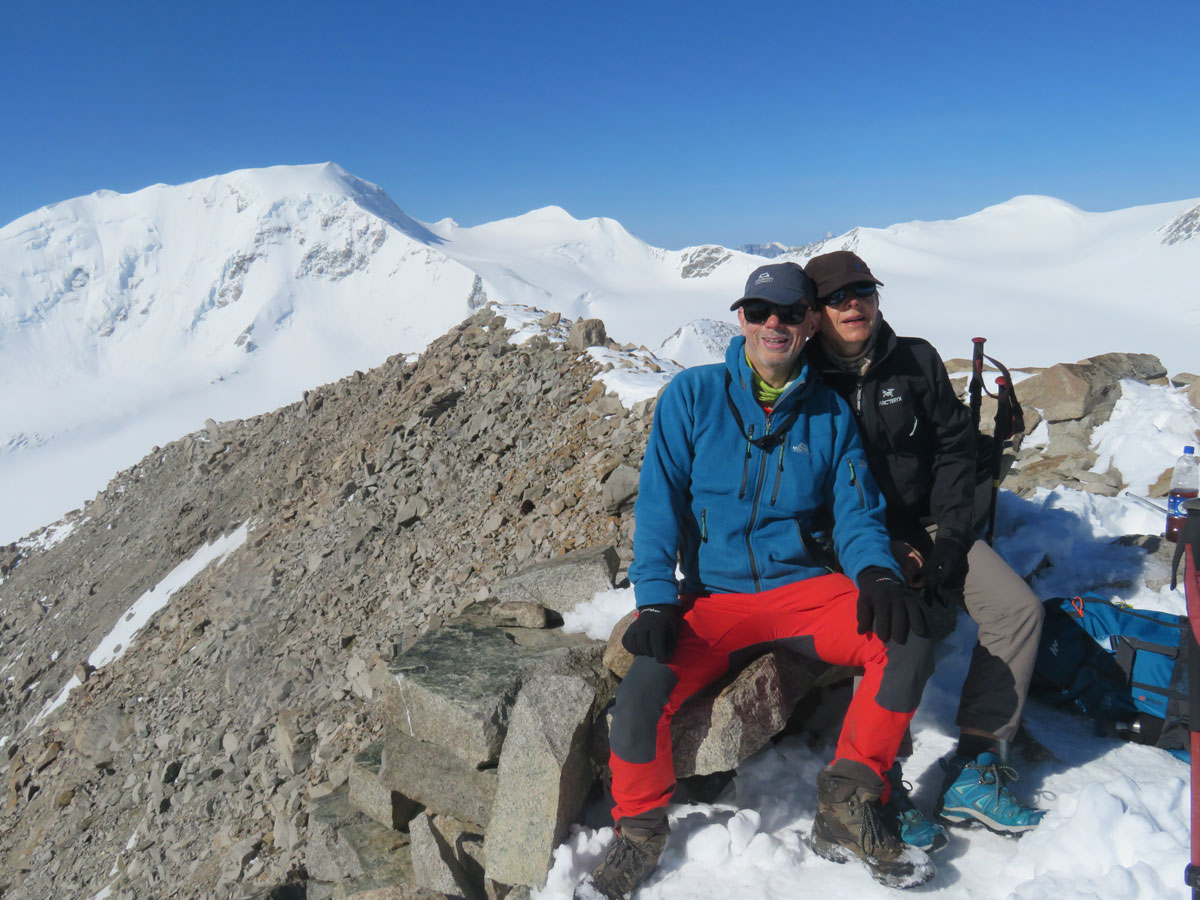 On my last visit in 2018, we had perfect conditions and everyone summitted everything, but that’s mountains and mountaineering.

For now, though my thoughts turned to other things such as beer, but even that was a two-day, off-road drive away in the frontier town of Bayan Olgii. Worth it when we got there, though!