This entry was posted on 16th April 2014 by James Turnbull. 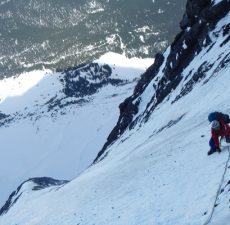 On Monday the 24th March my day off went as normal: wake up, look outside, sunshine; the text goes out, "who's climbing where and when?"

Nobody was free till early afternoon and so I did a few chores and then decided I couldn't wait any longer. Off I went to shunt on the only route I was keen to top rope, Masters Edge. I had tried it a while before but felt a long way off it so didn't think a lead would happen. It was just something to kill the time till the others arrived. The friction was top; it was just the wind, hmmm. After a quick play on my own, Jamie turned up and held the top rope for me. Oh dear, it all felt fine. Drew and Steve turned up all too keen to see the event. I waited a good long while half-hoping it would rain, or get too hot, or too cold or something but no. It was perfect, and my excuses were running out.

A few minutes later and I was rocking on to the finishing jug in control, happy but of course in a situation of complete danger. It's easy when you know how!

Normally this would get me banging on much longer and blowing my own trumpet but something much bigger, better and more important lay lurking round the corner!

I awoke the day after Masters Edge a little fuzzy after celebratory beers and checked the forecast. It said clear, cold and calm, even though the rain hammered hard on my window in Sheffield. One message and a phone call later and I've blagged the next week off work. I had been checking the forecast for Grindelwald, Switzerland. 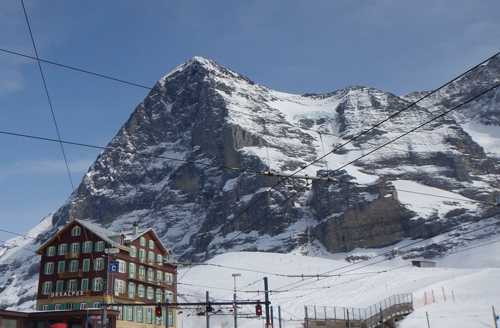 The Eiger North Face is possibly the best known climb in the world: steeped in legend, long, hard, dangerous and beautiful; it has captured the imagination of anyone who has ever dreamed of alpinism. And now I'm Eiger bound with John "Chaos" Crook (about the only person more psyched than me!).

After work on Friday I piled into John's van and headed south. 24hrs and very little sleep later, the van popped and black smoke poured out the back. My heart sank and I thought the worst - we would miss the weather window sat in a garage. John, clearly in the same mindset, said "Eiger first, I'll fix it after". We crawled into Grindelwald later that night at 15mph, followed by black smoke and funny looks.

Sunday afternoon we casually caught the train up, had another beer gazing at the face then headed up to bivi underneath the 1800m colossus. I phoned Mum to wish her a happy Mother's Day, Danni (my wife) to tell her all was well and we spent the night not sleeping (as normal) and watching a night time helicopter rescue from near the summit!

4am and we start up the face. With no moon and the tracks filled in we just hope we are heading the right way and that it would be light before the Difficult Crack. As we reach the crack and gear up properly, we turn our headtorches off for the first time - perfect! John deals with the crack well and it's all suddenly very real but we laugh, joke and whoop at what's going on and have fun! 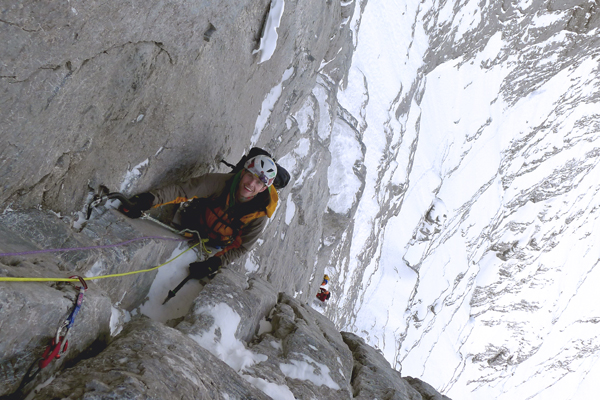 The Hinterstoisser Traverse goes quickly with the odd photo pose; next we race up the ice fields and we arrive at Death Bivi for lunch time. This really would be a comfy bivi spot but it is far too early, so we melt some snow, drink and eat and move on. 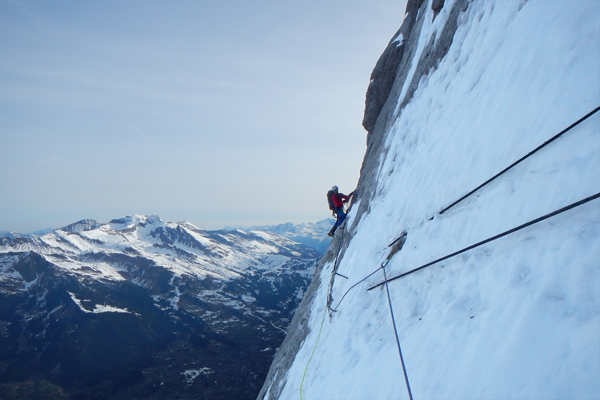 John Crook on the Hinterstoisser Traverse

The Ice Hose is steady but thin and will probably be the first thing to melt and leave the route unclimbable, on ice anyway. I lead us up the Ramp until the desperate looking Waterfall pitch. Thankfully John is very keen to lead it - what a great partner! This extremely steep pitch would be simple without packs and in rock boots but as it is there’s a bit of a fight, at least for me! 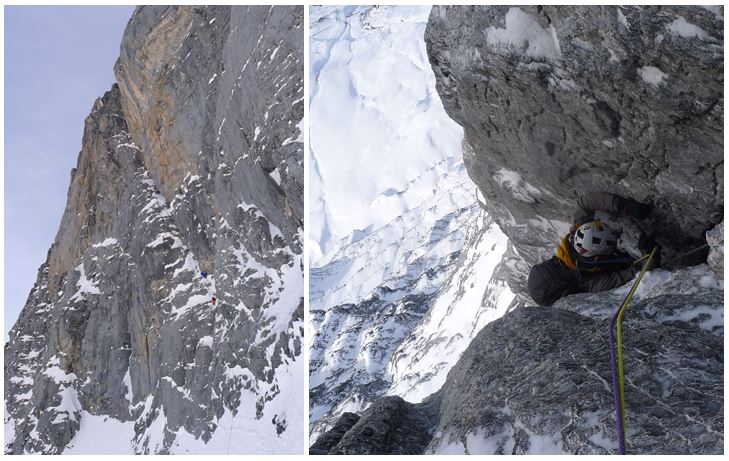 Next up is the Ice Bulge pitch. In good conditions it seems to go unnoticed - for us it is the crux of the climb. A huge snow/ice mushroom blocked the way and very thin (Scottish 6 or 7) moves headed out left. A guided ascent just in front of us had kindly left a cam in place that the clients had used to hook and pull past the crux. John teeters up to this heart in mouth, as he hooks it I relax, but not for long. It rips and the cam flies back towards Grindelwald. John falls back safely into the soft snow in the gully. Unphased he sets off again and arriving at the slot pushes in my Totem cams and makes his way up. Hero! 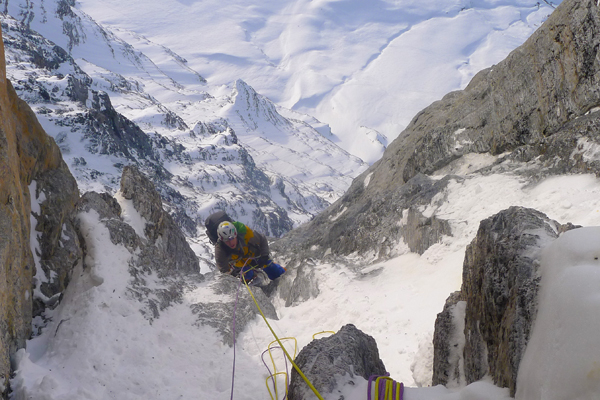 A couple of fairly straight forward pitches led to the Brittle Ledges and our planned bivi spot. The guided team were already there (expecting their cam back!) and we assumed they would have taken the best spot. To our disbelief Harry the guide had chosen a small overhanging area near the few bolts, where the 3 of them could only just sit. I guess it was the safest place but boy it looked uncomfy. We set up our own spot round the corner both lying flat out; lovely! After dark the 2 man Italian team turned up and also set up a sitting bivi. On the route we had the biggest bags (typical Brits) but it was well worth it as we ate well, danced to our speakers and MP3 player and had warm sleeping bags. That night we saw a (still unexplained) shooting star/comet that was about level with us and floated slowly through the sky burning green for around 10 seconds!

The next morning we are woken by both teams climbing round us. They are keen to start by 7am after an uncomfortable night, whereas we are very cozy and happy. Just before 10am John finally gets his act together and I lead us up the Brittle Crack for breakfast in an amazing position at the start of the Traverse of the Gods. This is incredible with a great sense of exposure, with easy (ish!), subtle sideways climbing in an extremely dangerous position, with over a 1500m of air under your heels.

This leads us to the White Spider high on the face. The Spider has a reputation for rock fall and is peppered with small stones, but today we are lucky as it is cold enough to hold the Eiger in one piece, other than small chucks ice from the teams ahead. The ice runnels at the top lead easily to the Quartz Crack. Here we catch up with the Italians (and also catch their falling camera!). They're hauling up their packs after removing them for the difficult pitch. John does a sterling job leading this steep corner with his pack on and once again I thrutch my way up on second.

We then have a long wait on our hands as the Italians headed up the Exit Chimneys. When we get on these they are just as I had heard; terrifying. Two pitches of rock climbing on slopey limestone with crampons on and hardly any gear, not too hard but in a very serious situation. This passes slowly but smoothly and leads us to the summit ice slopes, where we can smell the summit!

We had pictured ourselves running up these moving together but alas we are not Ueli. It's in pretty bad shape with some spicy, very narrow runnels, but we plough on and carefully step along the knife blade summit ridge. This truly is an amazing summit; I can only imagine the excitement the first ascent party must have felt at this point.

We arrive at the summit point with total elation, and we're rewarded by some of the most incredible views I have ever seen.

Everything had been better than expected and enormous fun every step of the way. As always you don't get to hang around long, as it's not over till you're down. 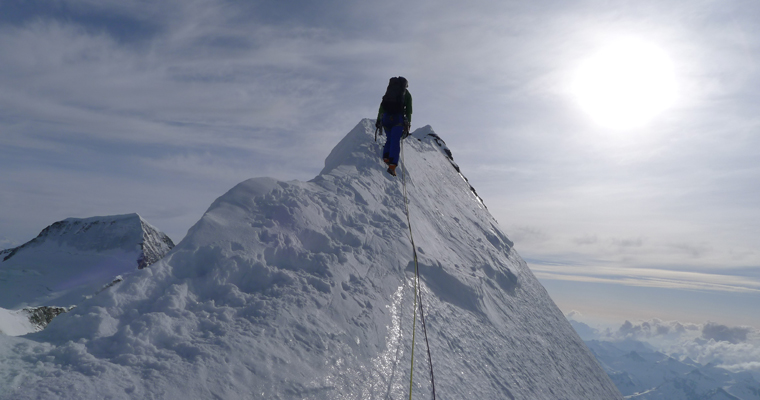 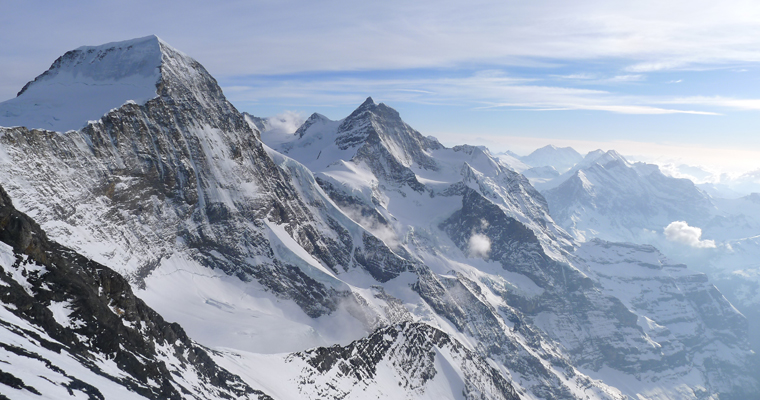 We headed down the West Flank which was in such easy condition we wished we had skis for half of it. Before we knew it we were back in the safety of the train station and I made the call to my wife close to tears of joy.

We had missed the last train down but this didn't seem to matter after what we'd just experienced. Most people would stay up the hill but I knew there were beers in the van, so down we go John! A couple of hours' slog later and we are drinking in the car park. Massive grins and one massive tick!

Normally, doing only two routes in a week is a pretty poor effort, but Masters Edge and North Face of the Eiger? I'll let myself off with that!

A special thanks to all who covered for me in the shop, Danni for her understanding and support and of course John for being an amazing partner.

Usually I wouldn't bother with this but as a few people have already asked what we took, there are clearly plenty of gear geeks out there: