This entry was posted on 2nd May 2019 by Rob Turnbull. 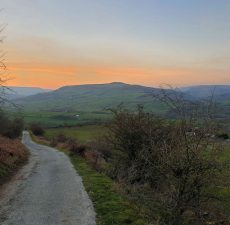 For the last few years, Outside staff have run the Edale Mountain Rescue classic route, The Nine Edges as an annual shop running challenge.

This year we decided to change the route, mainly just for the sake of a change, but also to get around the transport logistics of a linear route that didn’t start or finish at the shop!  However, we wanted it to be a challenge nonetheless, so we came up with a circular route that started and finished at the shop, and “The Hope Valley Skyline” was born. 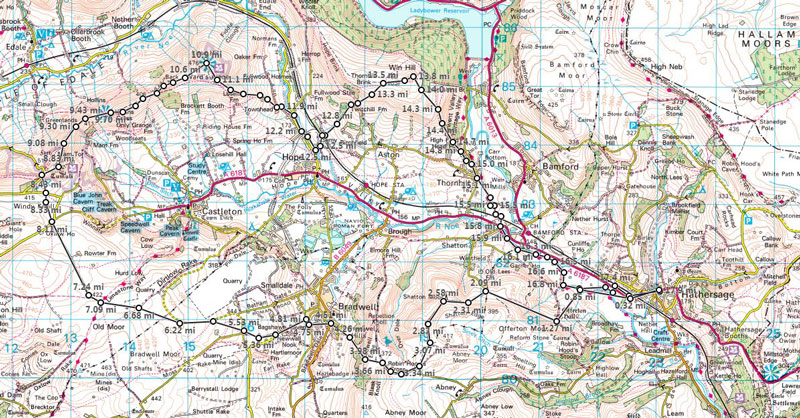 The route is 20 miles long, has around 3,500 ft of ascent and as the name suggests, it follows the edges of the Hope Valley.   It starts in Hathersage, climbs up to Shatton Moor, down into Bradwell, up to Bradwell Moor, then on to Mam Tor and along the Great Ridge to Lose Hill, down to Hope and back up over Win Hill, before descending the Thornhill trail and back along the river to Hathersage. 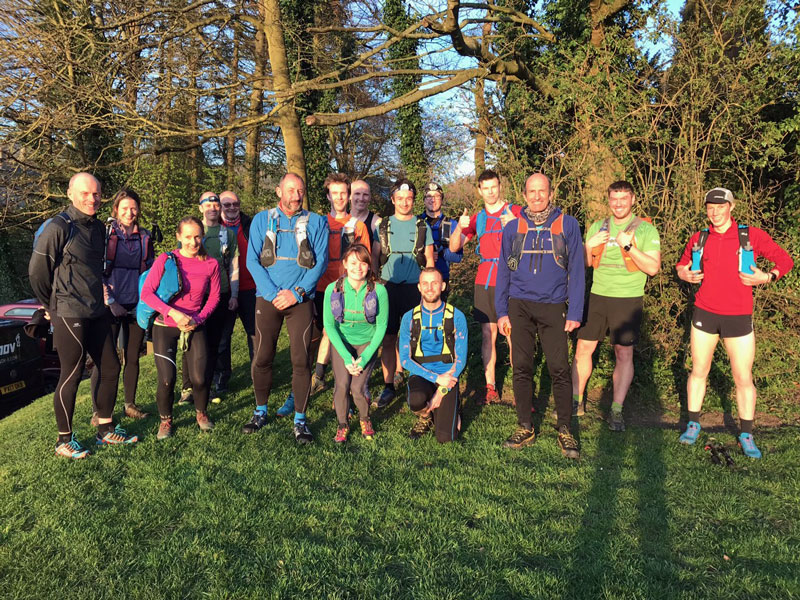 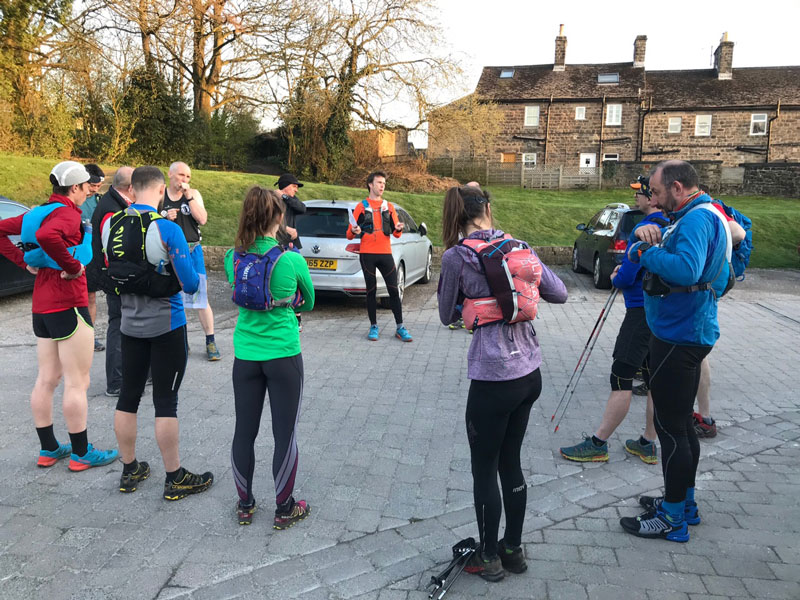 To make the challenge more manageable, we had welcome support from David Wing (AKA Wingy) and Janet James.  They drove ahead to 4 strategic positions where the route crossed roads to meet us and provide us with water and snacks. This also provided a safety net in case anyone wanted to run a smaller section of the route or decided to bail along the way. 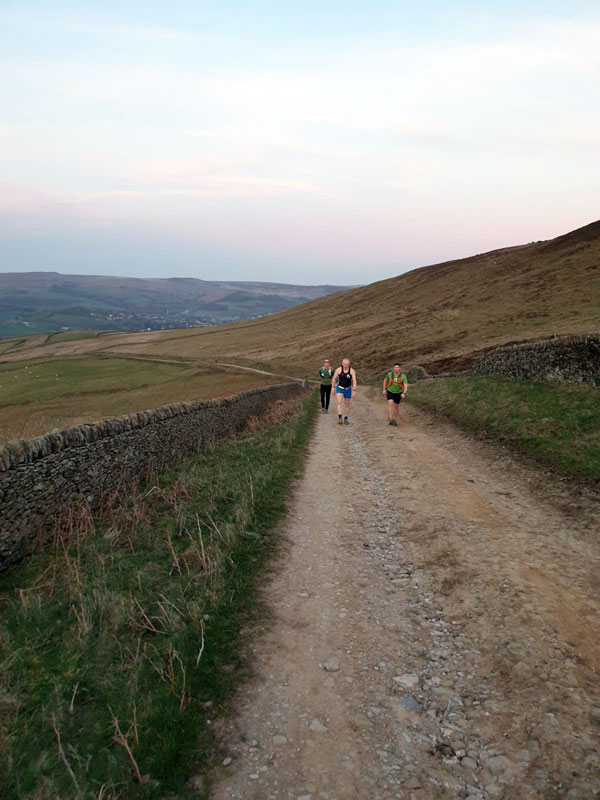 The track up to Shatton Mast

There was a good turnout of 15 runners, and we set off at 6pm on a beautiful March evening, managing all the way over Shatton Moor to the first checkpoint at Bradwell before we needed to get the headtorches out. 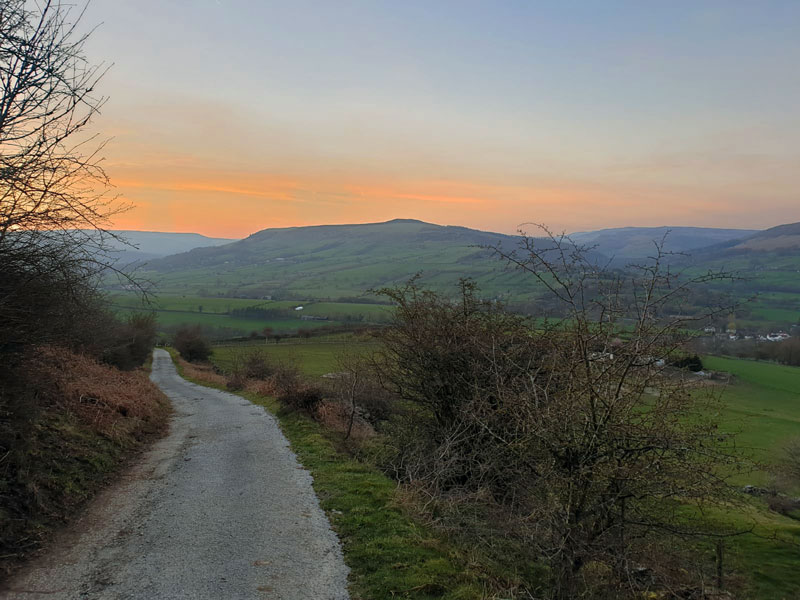 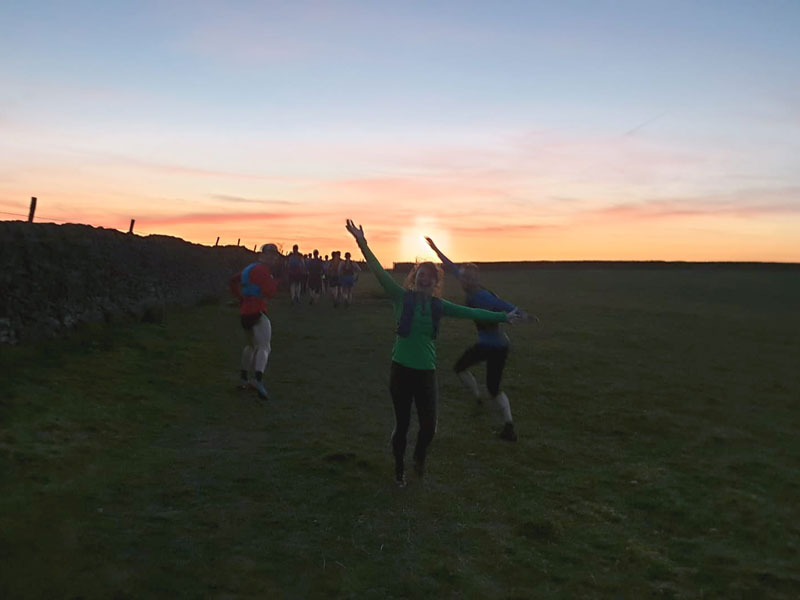 Loving the sunset on the descent into Bradwell

After a quick check in with Wingy and Janet, the big climb up over Bradwell Moor began.  After heading up a few small gennels behind some gardens in Bradwell we reached the exposed top of Bradwell Moor.  On such a beautiful, clear evening there were no route-finding issues, but this section from Bradwell village to the top of Bradwell Moor would be tricky in bad conditions. 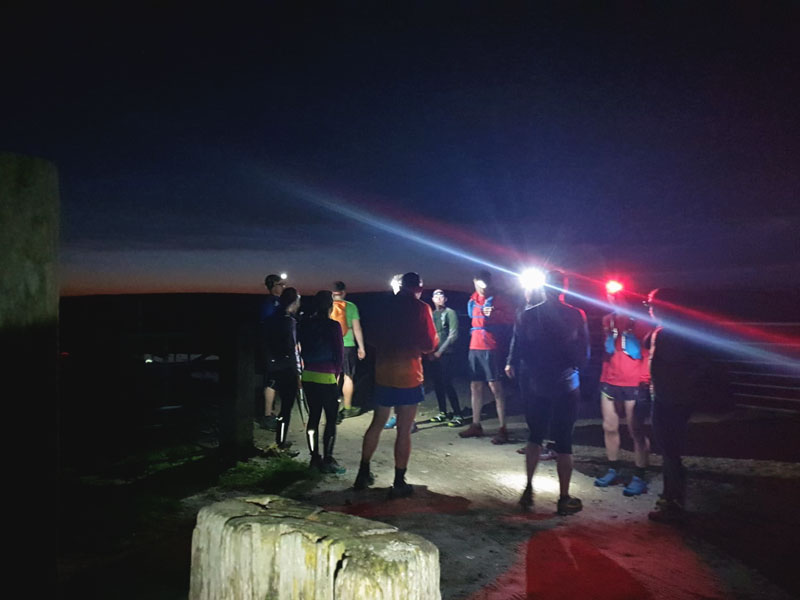 Regrouping on the top of Bradwell Moor

Once we joined up with the track on the top of the Moor that leads past Rowter Farm towards Mam Tor, the path became obvious.  We had our second checkpoint at Windy Knoll, which is approximately half way around the route. The snacks and water top-ups were very welcome, and much refreshed we headed up Mam Tor and along the ridge to Lose Hill.

Once we were at the far end of the Great Ridge, we made the steep descent to our 3rd check point on the Edale road in Hope, at Killhill Bridge.  From here there was a steep slog back up to the top of Win Hill where we stopped for a quick summit group picture, before taking the path back down to Thornhill and then over to Shatton for the final checkpoint. 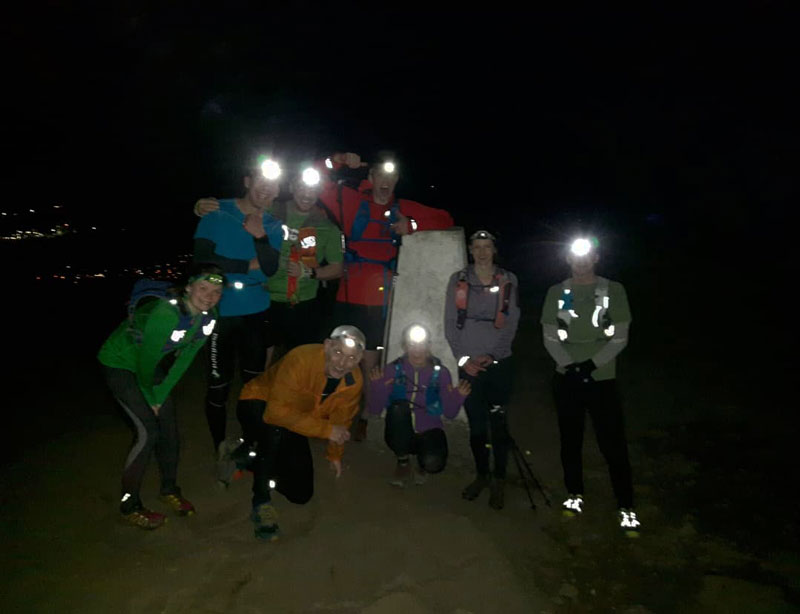 We were then on the home stretch, along the river back to Hathersage.  We crossed the river via the stepping stones and were back in the village for 10:20 (4hrs 20mins), allowing just enough time to make it to the pub for last orders!

The Hope Valley Skyline is a great route which takes in all the hills that circle the valley and we thoroughly recommended it as good longer day walk or run.

A big thank you to Janet and Wingy for the support and to everyone who ran on the evening.