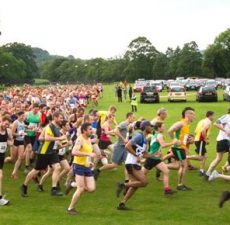 So it’s an otherwise normal day at work, emails to write, postage quotes to work out. Then something weird happens. When the shop manager says “come on Phil, do the Grindleford Fell Race tonight”. Rather than responding appropriately with a barrage of verbal abuse and reasons why not, I find myself saying “go on then”.

As it turns out, being lazy and not running very much is an exceedingly poor way to prepare for your first ever fell race. Who knew?

Fast forward a few hours and I’m lining up at the start with 300-odd other idiots, feeling really quite nervous. The vast majority of my running has been done on my own or with a couple of other people. Therefore being surrounded by a huge crowd of fit-looking folk who clearly run a lot is both intimidating and weirdly claustrophobic.

Start-line banter seems to mainly revolve around how much deeper the river crossing looks this year. Excuse me? River crossing? Um... I didn’t sign up for THAT. Except of course, I did, and apparently pulling out before the race has started is something of a running faux-pas. Ah well, it’s only four and a half miles, how hard can it be? 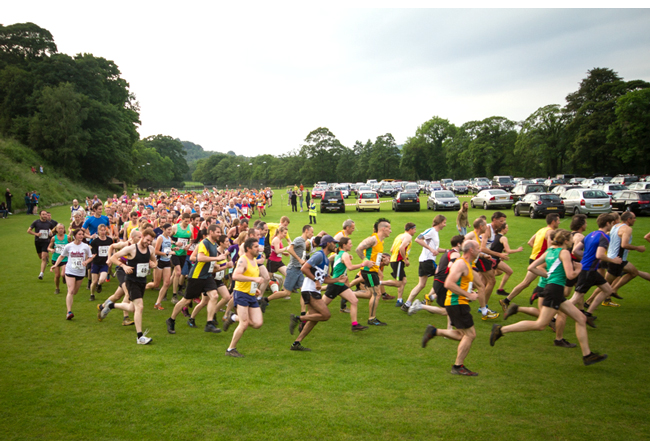 Start of the Grindleford Fell Race 2014

Oh right, really quite hard then. A lap of the playing fields later and I’m puffing and blowing like... well I would say like an old man but there’s quite a few of those way ahead of me and sprinting rapidly into the distance. Damn it. We leave the playing fields and a few hundred yards later the route enters a narrow tree-lined path and heads rapidly uphill. Progress slows to a single-file walk and I join in the general grumbling about how annoying this is and how much faster we’d be going if there weren’t all these people in the way, whilst secretly being incredibly grateful for a chance to breathe.

Reaching what I sincerely hope is the end of the uphill bit, my calves complaining bitterly, we’re greeted by a nice open field. Unfortunately this turns out to hide a huge bog and we’re soon all splashing through calf- to knee-deep squishy stuff. Lovely. Some clown is lurking behind a nearby tree with a camera shouting “Smile!” and snaps a quick pic whilst I glare through sweat-filled eyes and try to figure out who he is. Oh, it’s one of Outside’s buyers – I consider stopping to smash the camera but I can hear the pounding of feet behind and I really don’t want to lose any places so I make a mental note to steal it later on. 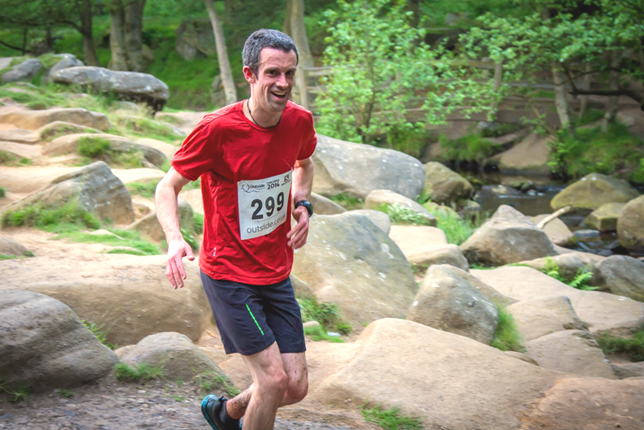 Downhill through Padley Gorge it’s all about the rock hopping. Throwing caution to the winds I hurtle down the boulder-strewn path. Making up a few places as I pass people who have elected to go at a sensible non-potential-ankle-breaking pace.

At the bottom of the gorge the path flattens out (flat ground feels so hard after running downhill!). I spy Paul from Rab up ahead. Paul’s an ex-Outside staff member and experienced fell runner with legs approximately the length of a giraffe’s. Therefore I’m chuffed to bits to be anywhere near him. I picked up the pace, run him down, and am then somewhat chastened to realise that he’s twisted BOTH ankles on the downhill. He's barely hobbling along. He looks to be in pain, and I do feel quite sorry for him, but hey, we’re racing. I push him into a nettle bush and run past.

More downhill cowpat- and bog-dodging and I’m starting to feel quite sick. Perhaps eating a full meal an hour before the race wasn’t such a good idea? I’m musing on the likelihood of seeing chicken kiev again.  Rubbing mud off my fancy GPS watch to see how much more of this torture there’s likely to be, I notice that all the runners ahead of me are disappearing. Ah right, the river.

Trotting down the bank, I see that people seem to be adopting a cautious wading technique. Seeing this as the last opportunity to make up a couple of places, I break into a sprint and splash my way across, soaking both the other runners and the awaiting ranks of photographers and cheering spectators alike. I decide not to hang about to see how annoyed they all are, make a final stagger across the playing fields and then I’m over the finish line and making a beeline for an enticing table full of cups of much-needed water.

It’s now less than twenty-four hours since the race. I’ve no idea what place I made, my calves are tighter than a first-gear hairpin and I can confidently say, without a shadow of a doubt that I will never put myself through that again. However I can also very confidently say without even a smidgen of a shadow of a doubt that in about a day I will have forgotten the pain, sweat, tears and midges and only remember the fact that it was awesome. What’s that? The Outside Challenge? Hope Wakes fell race on the 2nd July? Oh, go on then. How hard can it be?

P.S. If you’re out running this summer, get yourself a pair of MTR 141 shorts. If you should happen to run through a river and soak yourself completely from the waist down, they dry really very quickly!