This entry was posted on 2nd May 2019 by Tom Richardson. 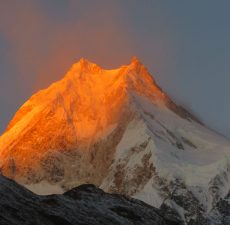 Ever since my first winter trip in 1996 I have been an enthusiast for visiting Nepal out of the main trekking/climbing seasons. There are many benefits; most notably the weather is usually very much to my taste – that is cold and clear. Also, there are very few other foreigners around even in popular areas such as Everest or Annapurna.

For winter 2018-19 we planned to trek in the Manaslu area. Manaslu itself is in central Nepal and it’s the 8th highest mountain on earth at 8163m. FYI, it is pronounced Man-as-loo rather than Mana-sloo. The name has evolved from the Tibetan description of how the mountain looks from a high pass, the Larkya La (5175m), crossed for centuries by Tibetan Traders. Crossing this pass was also our objective. 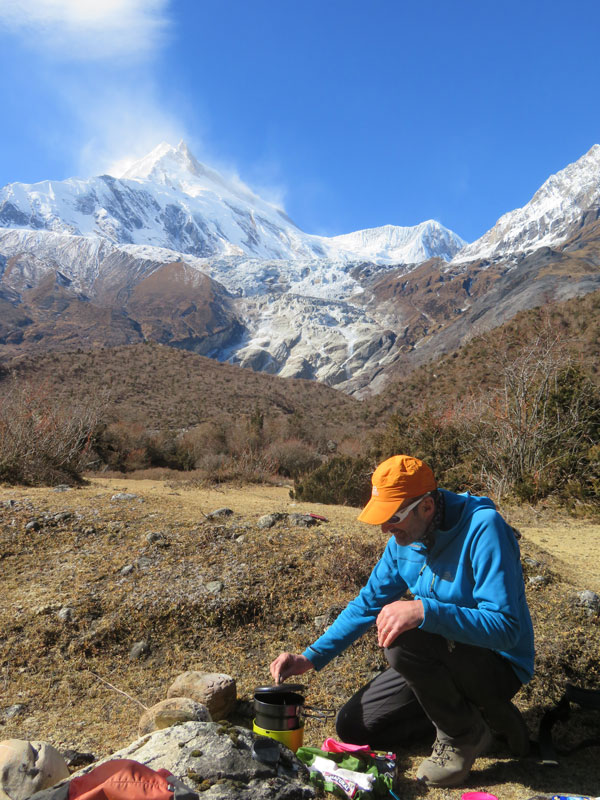 Brewing up below Manaslu 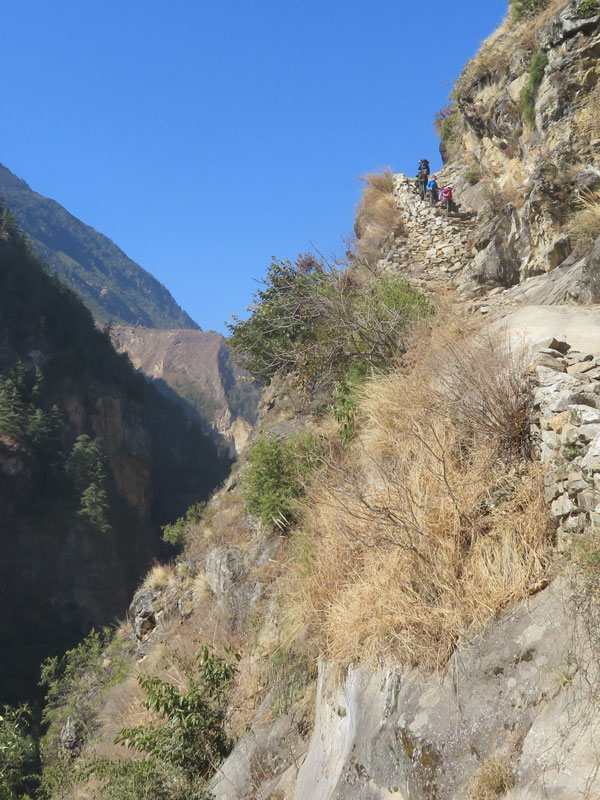 The area has always had a reputation for the unexpected. In 1953, a Japanese Manaslu expedition made the first attempt to reach the summit and got to well over 7000m. They returned in 1954 to finish the job. Unfortunately, in the intervening period the locals’ crops had failed, there had been an epidemic of smallpox and an enormous avalanche had descended from the mountain and destroyed the local monastery (called a Gompa), killing three monks. They felt that the attempt on the mountain had upset the god who lived on the mountain. Maybe they were right.

The summit was finally achieved by another Japanese expedition in 1956, after the intervention of both Sherpas and a Nepalese Government official smoothed the way at least to the bottom of the mountain.

Continuing its reputation, in 1972 15 climbers on a Korean expedition were killed by an avalanche engulfing their tents. It is still one of the worst mountaineering disasters in history, but only 15 days later on the other side of the mountain, a young climber from the South Tyrol called Reinhold Messner reached the summit alone and without bottled oxygen. It was his second 8000er and he would be the first person to climb all 14 8000 metre peaks. 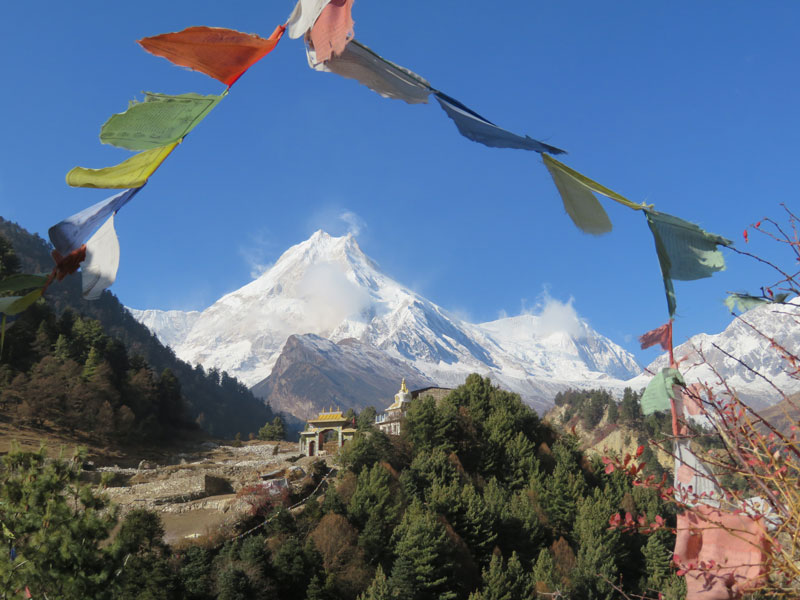 The classic trek around Manaslu via the Larkya La has been open for relatively few years and initially was only possible for self-contained groups camping all the way. Things have changed a bit these days and there are a few lodges, although special permits are still required because of its proximity to Tibet. In Kathmandu we were informed that the lodges either side of the pass would be closed for the winter season so went prepared with a tent (Wild Country Hoolie 3), food and fuel for a night and a day to get us over.

Four out of five of us had trekked together several times before; myself, my wife Janet, our mutual friend Janet Moore and Kami Sherpa. From the Everest Area and now a newly qualified Trekking Guide, Kami Sherpa is an old friend and veteran of our winter trips. He brought his young brother-in-law Nima Nuru to help, also an experienced trekker and ice climber. He was keen, good spirited and as with all young people somewhat frustrated at the lack of Wi Fi throughout the trip!

The lowland area at the start of the trek was hit very badly by the 2015 earthquake, villages were flattened and roads destroyed, as it was the epicentre of the quake. If there is a plus side to such things, it has triggered a large campaign of government road building and general repair. In just a few years, like the Annapurnas, there will likely be a road blasted through the narrow gorge of the Buddhi Gandaki river all the way to the final settlement at Samdu. As trekkers and mountaineers, we may prefer the wilderness to remain inaccessible, but for locals it gives access to health care, education, trade and the outside world.

At one point along a particularly narrow section of the gorge, we were stopped by soldiers from the Nepalese Army and instructed to take shelter as road builders blasted a route along a vertical cliff on the other side of the river near the village of Jagat. We thought that they were being overly cautious until the dynamite exploded, shook the ground and sent a hail of rocks right across the river, pelting the wall of the lodge in which we were huddled. 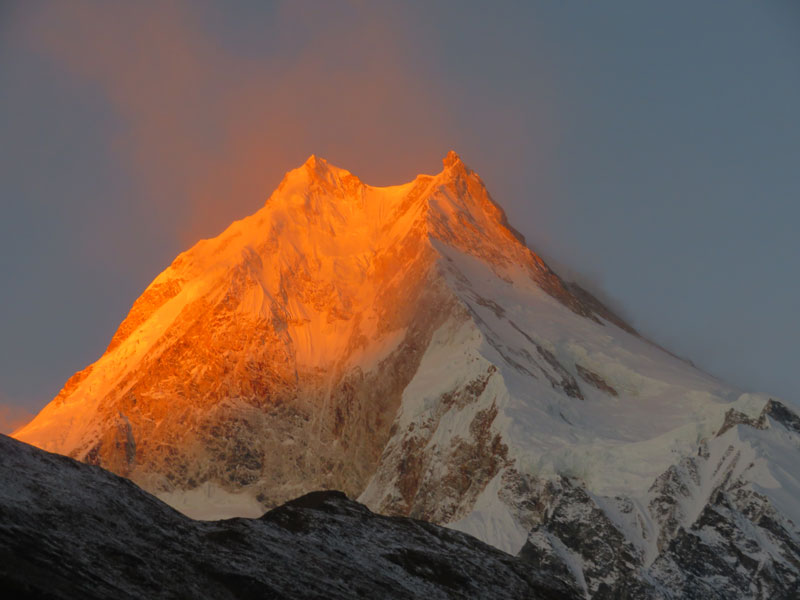 Later on the trail, we met a couple of small groups coming down. They reported that the lodges high up were closed because of exceptionally cold weather, so they could not cross the pass. We were however confident that equipped with out tent and supplies we could at the very least give it a go.

Two days from the highest village we got our first views of Manaslu and the surrounding peaks, but confusingly adjacent to it we could see a huge plume of smoke billowing upwards. We speculated about what it was but only learned the cause when we got much nearer. 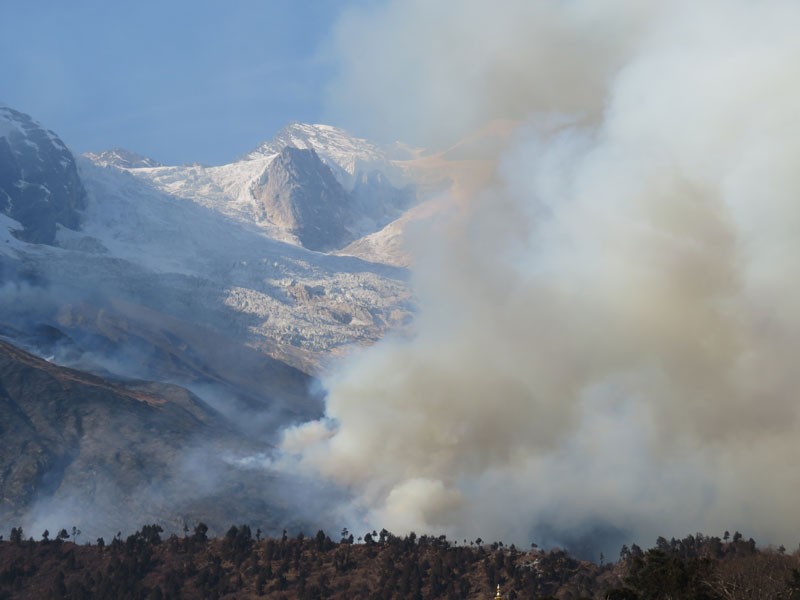 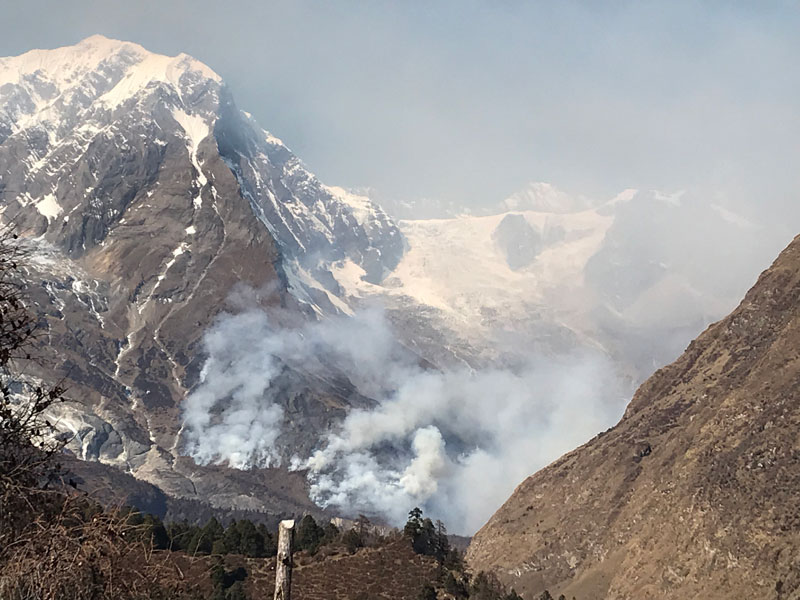 The only other group in the area, two Spanish Trekkers with a Guide and Porter had attempted to trek to Manaslu Base Camp. When they rested below the snout of the glacier one of them dropped a cigarette end and set the dry scrub and brush on fire. The fire raged over a vast area pushed uphill by the prevailing winds. It burned for more than 4 days, emitting huge visible flames and clouds of smoke, until on reaching the edge of the glacier it extinguished itself. An immeasurable loss of all sorts of flora and fauna, but fortunately no human life.

The last we saw of them, all four were being escorted off down the trail by the local Policeman. Despite the drama and destruction there was no mention of it in the Nepalese media. It was only lucky that the wind direction didn’t change.

We spent Christmas Day in the only open lodge in Shyala hosted by a friendly Tibetan couple. We slept in two wooden garden shed type structures and revelled in the breathtaking beauty of sunrise on Manaslu. It was a memorable day with great local food and a delicious cake weighing in at 2kg, made by Janet (and carried by me) and a beer each which the lodge owner had walked downhill for two hours to buy for us from a friend in Lho. 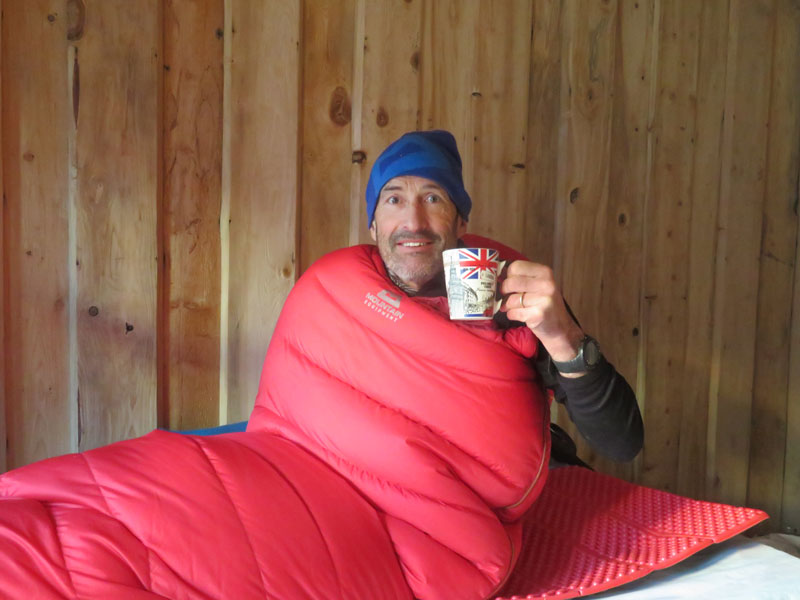 Tea in the bothy 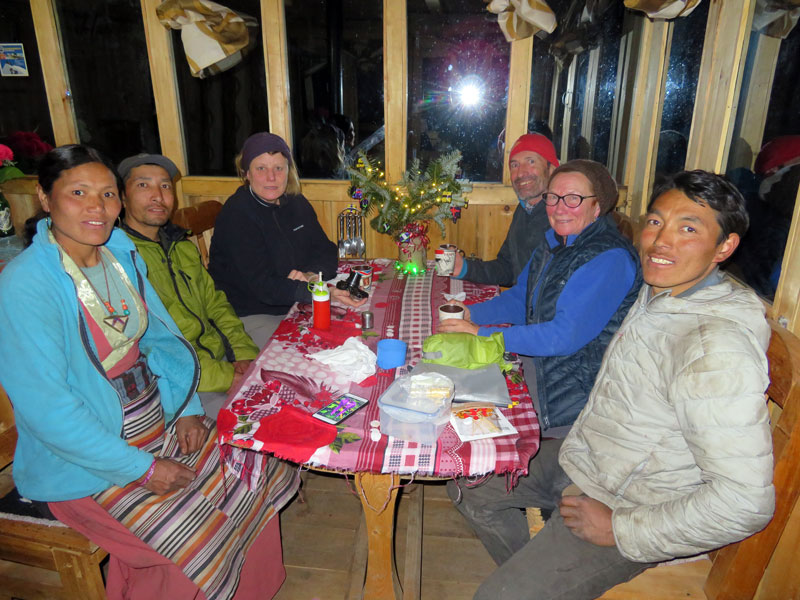 30 minutes out from our lodge next morning we also encountered a dozen or so Griffon vultures preparing for a mass Boxing Day feed on a carcass just 50 metres ahead; a jackal going about its business crossing the path just in front of us, and yaks munching contentedly on the surrounding grass, all against the backdrop of the glaciers tumbling down from the surrounding peaks.

We also received more local information about the route ahead. It was not good news. All the lodges ahead were closed for the winter. There was no possibility of buying additional food or fuel in the area so in effect we had no option but to return the way we had come. We didn’t leave without trekking around the beautiful lake Birendra Tal, and Kami and I ventured up towards the pass as far as Samdo – just for future reference.

Then it was back down the way we had come. We spent New Year’s Eve in Jagat where unfortunately in my enthusiasm to get up the steps to the roof of our lodge to check how the laundry was drying, I ran into a corrugated iron roof taking a large slice off my head, Fortunately Janet is a nurse and was able to attend to it, but it did eventually take 3 months to heal.

Finally, after a few more days walking and driving we reached Kathmandu and Manaslu’s reputation for the unexpected was reaffirmed.