This entry was posted on 16th June 2022 by Tom Richardson. 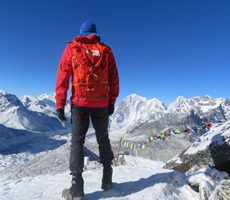 The Tenzing Hillary Everest Marathon takes place on 29th May each year. It started in 2003, the brain child of Bikram Pandey of Himex Nepal, to mark the historic first ascent of Everest in 1953. It attracts an international gathering of proper serious mountain runners ...plus me. I entered the Everest Marathon in 2013 and 14 and the Everest Ultra Marathon 2016, 2017 and 2022. It was cancelled in 2015 due to the Nepal Earthquake and in 2020 and 2021 due to Covid. 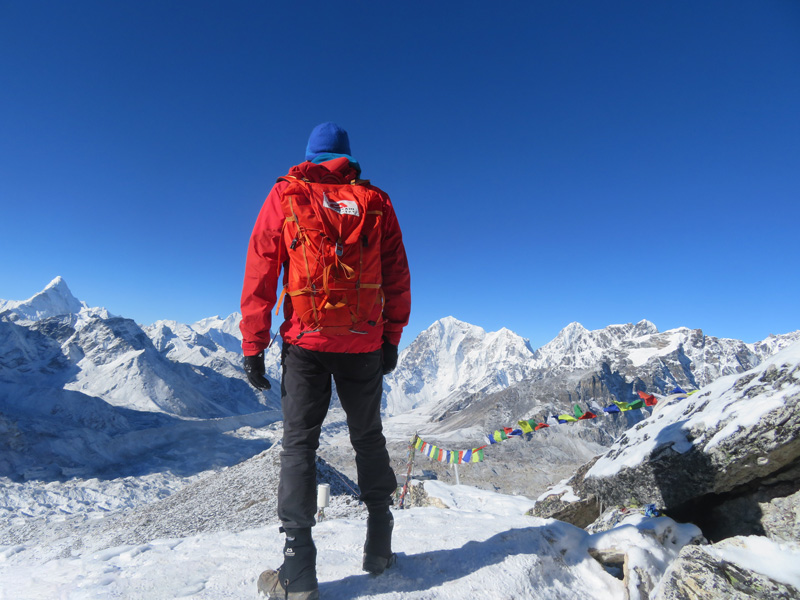 This year I co-led a strong group from KE Adventure Travel to Everest Base Camp, who ran in all three races including the first female foreign finisher in the Marathon, Kerri Man Bookless. I think there were 146 competitors for the standard marathon, 21 for the half and 15 for the Ultra (60km). 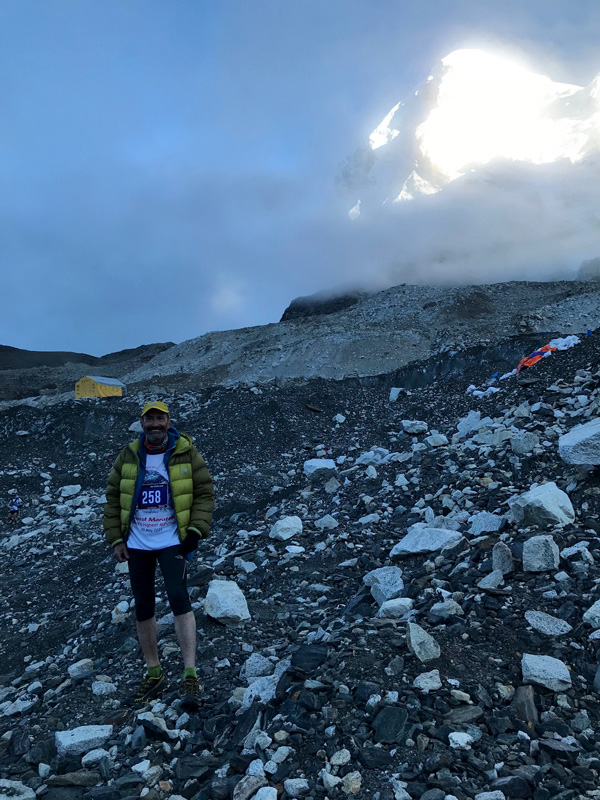 Everest Marathon 2022 - Waiting for the start 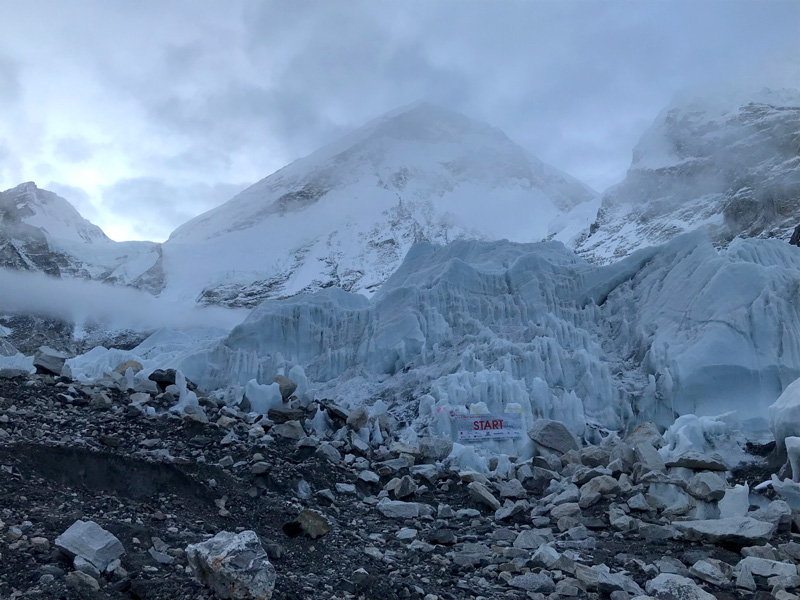 Tenzing Hillary Marathon 2022 - The starting point at the Khumbu Icefall

The Race began as usual at the foot of the Khumbu Icefall at 5350m, 6am 29th May. There was a new time cut off at Pangboche junction at 11am. Previously it had been at Naar La at 6pm, the remotest point on the route, where the only way out is to complete the race. I made the new cut off with three minutes to spare! I was delighted.

Tenzing Hillary Marathon 2022: View of Dole from the other side of the valley heading to Naar La

The route then follows the long remote valley uphill on a precariously narrow trail above a long steep drop towards Gokyo via Phortse and crosses the river at Naar La to Machermo. I was not travelling alone here. I had a Sherpa escort for safety and as I was the last person through, two Himex staff members at water points and finally the owner of the “food point” lodge at Naar La. It took more than 6 hours to reach Naar La, mostly engulfed in thick cloud.

We stopped at the Food Point at Naar La for noodles and were told two runners had left just 15 minutes ahead. The Lodge owner then escorted us to the bridge over the river that runs from the Gokyo Lakes. Even at the time it seemed a long way and indeed it was, as it wasn’t where I remembered it in 2017, maybe the other one had been swept away? Or maybe I'm just losing it? By the time we reached Machermo on the other side it was dark.

Then followed a long downhill to the settlement at Dole, again on narrow paths above big drops, then further down again through rhododendron and then pine forest, past an Army/National Park Check Post in the middle of nowhere (where we had to sign in) to Phortse Tenga before a long steep zigzag climb back to 4100m at the Mong La. The final few miles are down and undulating on the standard Everest trekking route back to Namche Bazaar. 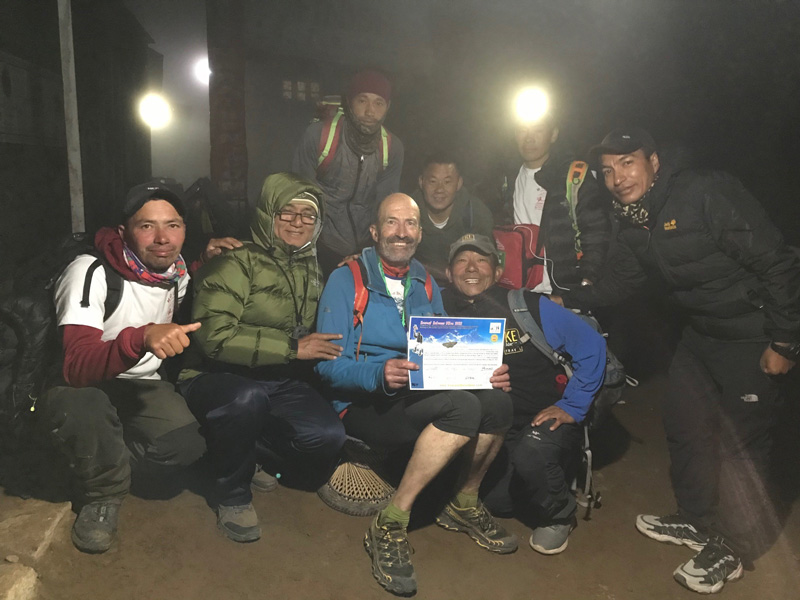 I finally reached Namche Bazaar (3400m) at 1.50am. Much to my surprise the finishing point was still set up and I had a very warm welcome from the staff there and a much needed cold beer. It was raining and dark but nearby music was pumping out. All the local people who had been working on Everest expeditions during the season were celebrating “Everest Day” too. On my hobble back to the lodge where I was staying I was met with lots of slaps on the back and "well done Tom Dai, congratulations,” by many very cheery young Sherpas friends also wending their way home.

One Ultra runner dropped out with injury at Pangboche. I was the last finisher in 14th place taking 19hrs and 23minutes.The first 5 finishers were Nepal and the winner was Arjun Rai Kumlung in 7hrs 4 minutes, which puts things into perspective. At the moment I think this was probably my last Tenzing Hillary race. I am a seasoned old age pensioner with a Senior Citizen's Bus Pass! 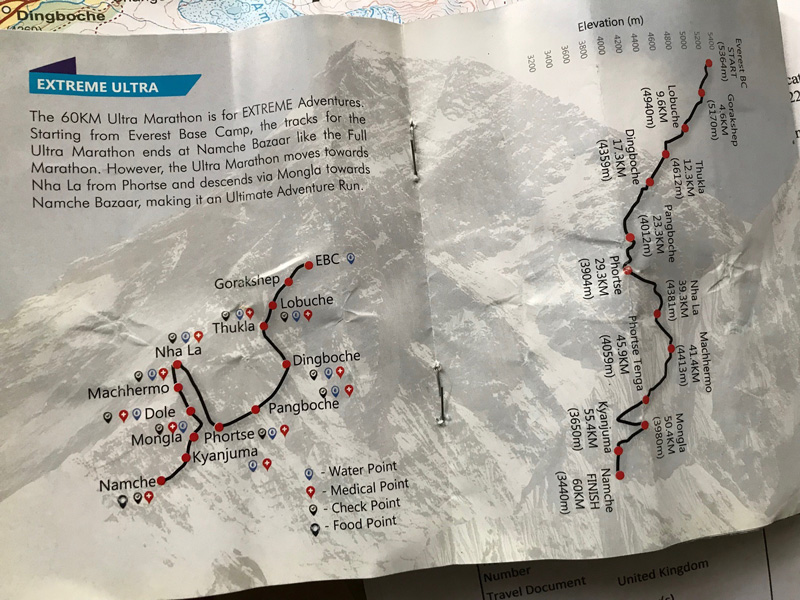